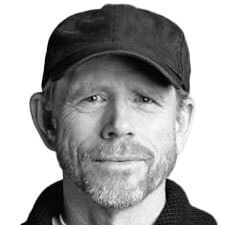 Academy Award-winning filmmaker
Academy Award-winning filmmaker Ron Howard is one of this generation’s most popular directors. From the critically acclaimed Oscar-winning dramas A Beautiful Mind and Apollo 13 to the hit comedies Parenthood and Splash, he has created some of Hollywood’s most memorable films. Whether in front of or behind the camera, or for film, television or documentaries, Howard has been a part of many of the most significant projects in every decade since the 1960s.

A Beautiful Mind earned Howard an Oscar for Best Director and Best Picture, and also won for Best Screenplay and Best Supporting Actress. Howard has also been honored by numerous organizations and in March 2013, Howard was inducted into the Television Hall of Fame. In 2015, Howard was honored with a second star on the Hollywood Walk of Fame, making him one of the select few to have been recognized with two stars.

Howard is currently in post-production on Thirteen Lives about the rescue of twelve boys and their soccer coach from a flooded cave in Thailand and is awaiting the release of his documentary on renowned chef José Andrés and his World Central Kitchen.

Howard’s past films also include the 2017 Grammy award-winning Best Music Film The Beatles: Eight Days a Week - The Touring Years, Solo: A Star Wars Story, Rush, The Da Vinci Code, Frost/Nixon, How The Grinch Stole Christmas, Ransom, Backdraft, The Paper, Far and Away, Willow and Cocoon, just to name a few.

Howard has also served as an executive producer on a number of award-winning television shows, such as the Emmy-winning HBO miniseries From the Earth to the Moon, Fox’s Emmy Award winning Best Comedy Arrested Development - a series he also narrates, NBC’s Parenthood, and NatGeo’s award winning anthology series Genius.

Howard co-founded Impact, a content accelerator whose mission is to discover, cultivate and nurture creative storytellers around the world through its innovative talent identification and mentorship system, which enables promising writers to break into the industry in a matter of months. To date, Impact has built a community of over 65,000 writers across 140+ countries.

Howard made his directorial debut in 1977 with the comedy Grand Theft Auto. He began his career in film as a child actor, first appearing in The Journey and The Music Man. He later starred as Opie on the long-running television series The Andy Griffith Show and as Richie Cunningham on the popular series Happy Days, both Nielsen rated #1 series.

Howard met his longtime friend and business partner Brian Grazer in the early 1980s and embarked on what is now one of the longest running partnerships in Hollywood. Their collaboration began with the hit comedies Night Shift and Splash, and in 1986 the two founded Imagine Entertainment, which they continue to run together as executive chairmen.
Read More Read Less
Monday, 23 May, 2022 / 04:00 PM - 04:45 PM AEST
(02:00 AM - 02:45 AM EDT)

You don’t want to miss this unforgettable interview with Academy Award-winning filmmaker, Ron Howard. Ron is one of the film and television world’s most enduring legends with work on films including A Beautiful Mind, Solo: A Star Wars Story, Rush, The Da Vinci Code, Apollo 13, and Frost/Nixon. Ron will share stories from his incredible career spanning sixty years in the entertainment industry as a producer, director, writer and star of some of the most seminal productions of every decade since the 1960’s.