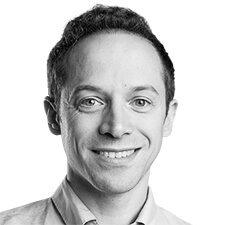 Expert on the Science of High Performance
New York Times best-selling author and science writer David Epstein has made it his mission to uncover the keys to achieving high performance in any domain, and to debunk popular myths along the way. His New York Times best-seller, The Sports Gene, took readers inside the surprising science of extraordinary athletic performance. (It has been translated in 21 languages and was read by both President Barack Obama and former Secretary of State Condoleezza Rice.) In his latest book, the #1 New York Times, Wall Street Journal, 800-CEO-READ and Amazon best-seller Range: Why Generalists Triumph in a Specialized World, Epstein examines the world’s top performers, from professional athletes to artists, scientists, entrepreneurs and Nobel laureates. Named as one of Wharton professor Adam Grant’s “New Leadership Books to Read in 2019,” the Washington Post’s “10 Leadership Books to Watch For,” and selected for the JP Morgan Summer Reading List, Range has received rave reviews from the likes of Daniel Pink and Malcolm Gladwell, and best-selling author Susan Cain as well as praise from the Wall Street Journal, New York Times and NPR.
Epstein brings bold new insights to business, education, technological innovation, healthcare and other industries on the best approach to career development. His conclusion: In most fields, especially those that are complex, unpredictable, and difficult to automate, generalists, not specialists, are primed to excel. Sharing fascinating examples from the career trajectories of Duke Ellington and Roger Federer to a preeminent CEO who took her first job around the age her peers were retiring, Epstein shows that at every stage of life, from the development of children in math, music and sports to students fresh out of college trying to find their way, to midcareer professionals in need of a change and would-be retirees looking for a new vocation after moving on from their previous one — generalists triumph as the world around them becomes increasingly specialized.
Epstein has spoken on the science of high performance and novel uses (and misuses) of data on five continents, to organizations from NASA to the Pat Tillman Foundation and at a diverse array of events from the World Knowledge Forum in Seoul to the open-source software community’s Hadoop Summit. In 2014, his main stage TED Talk was one of the 20 most viewed of the year and has since been viewed over twelve million times. It was recently touted by Bill Gates. Epstein’s writing has appeared in numerous national and international publications, from The New York Times and The Atlantic to National Geographic. He was previously an investigative reporter at ProPublica, where his work ranged from an investigation into the DEA’s complicated pursuit of Chapo Guzman’s rivals, to a This American Life episode about a woman with muscular dystrophy who discovered that she shares a mutated gene with an Olympic medalist. A former Sports Illustrated senior writer, Epstein authored or co-authored several of their most high-profile investigative pieces, including the 2009 revelation of Yankees third baseman Alex Rodriguez’s steroid use. He has master’s degrees in environmental science and journalism from Columbia University, and was twice NCAA All-East as an 800-meter runner. Merging stories from the worlds of sports, business, medicine, and education, Epstein sheds light on the paths to peak performance. From how to best prepare for our specialized world to how to optimally incorporate AI into our workplaces, Epstein unpacks the science of success — leaving audiences with actionable takeaways to improve how they live, work, and prepare for the future.
Read More Read Less
Tuesday, March 31, 2020 / 05:30 PM - 06:15 PM EDT

Guest Keynote: The Power of Range: The Secret to Success in Any Domain

What’s the most effective path to success in any domain? It’s not what you think. Plenty of experts argue that anyone who wants to develop a skill, play an instrument, or lead their field should start early, focus intensely, and rack up as many hours of deliberate practice as possible. If you dabble or delay, you’ll never catch up to the people who got a head start. But a closer look at research on the world’s top performers, from professional athletes to Nobel laureates, shows that early specialization is the exception, not the rule. Best-selling author on the science of performance David Epstein has examined the world’s most successful athletes, artists, musicians, inventors, forecasters and scientists. He discovered that in most fields—especially those that are complex, unpredictable, and difficult to automate—generalists, not specialists, are primed to excel. Generalists often find their path late, and they juggle many interests rather than focusing on one. They’re also more creative, more agile, and able to make connections their more specialized peers can’t see.

Join us for the opportunity to meet Guest Keynote Speaker David Epstein and receive a signed copy of his book ‘Range: Why Generalists Triumph in a Specialized World’. Please note this opportunity is first-come, first-served, while supplies last.