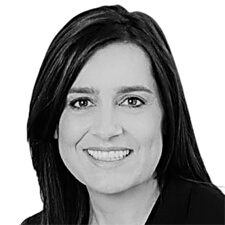 Business Leader and Former CEO of Flywheel Sports, Former Global President of Gatorade, and Former Marketing Director at Nike, Author
Described by the media as everything from “Superwoman undercover” to “The Pied Piper of potential,” Sarah Robb O’Hagan is an executive, activist, entrepreneur, and founder of Extreme Living—a company designed to help individuals, teams, and organizations play to their highest potential. She is now the CEO of EXOS, the world leader in elite performance training that helps people reach higher and achieve more.

She is the former CEO of Flywheel Sports, the former president of luxury health club Equinox, the former global president of Gatorade, a former GM and marketing director at Nike, and a former marketing director at the Virgin Group. She is a rare blend of fierce businesswoman, cheerleading Mom, passionate women’s advocate, and high-energy innovator. In fast-paced presentations and in her book, Extreme You: Step Up, Stand Out, Kick Ass, Repeat, Sarah lays out a roadmap for becoming the most “extreme” version of yourself by operating at the edge of your potential and by building highly-collaborative, focused, and successful teams and corporations. Drawing on her decades experience at some of the world’s most influential brands, she shares practical takeaways including how to make failure your fuel, discover your most competitive playing field, get out of line rather than always following conventional wisdom, and bring out the “extreme” in others. She is exclusively represented by Leading Authorities speakers bureau.

Professionally, Sarah personally led the development of several breakthrough innovation efforts in her corporate career, including: the turnaround of Gatorade from a declining sports drink into an innovative sports performance company exemplified by the highly-successful G Series line; the Virgin Atlantic Airways-Austin Powers movie collaboration in which the airline was rebranded “Virgin Shaglantic;” the roll-out of the game-changing Nike Plus technology developed alongside Apple; and Equinox’s transformation from a bricks-and-mortar gym to an always-on, digital-first fitness business. She also experienced what she calls a “canyon of career despair” in her 20s, using major back-to-back failures to learn, to grow, and to motivate herself forward to eventually lead a $5 billion global business by the age of 38. She shares firsthand accounts of these peaks and valleys—pairing stories of firings with a behind-the-scenes look at Gatorade’s transformational turnaround under her stewardship—to illustrate what it truly takes to be successful, why you learn more when play for all or nothing, the importance of humility, and why you must always “play your own game.”

Robb O’Hagan has been named twice to Forbes magazine’s list of the “Most Powerful Women in Sports,” named a “Woman to Watch” by Ad Age magazine, dubbed one of the “Most Creative People in Business” by Fast Company, and named to “40 Under 40” lists by Sports Business Journal, Crain’s Chicago Business, and Sports Goods Business.

Sarah is a passionate advocate for an active lifestyle and believes the lessons learned from sports and fitness can be applied to improve performance in the work place. She has served on Hillary Clinton’s US State Department Council to Empower Women and Girls through Sports, and is a trustee of the Women’s Sports Foundation. She is an active member of the World Class New Zealand Network, as she remains committed to helping the country’s development, international competitiveness, and economic growth. In 2016, she was awarded the Sir Peter Blake Trust Award for outstanding leadership, and in 2018 she was named a “WISE” Woman of the Year.
Read More Read Less
Wednesday, April 01, 2020 / 09:00 AM - 09:45 AM EDT

What goes into a perfect team? Legendary business leader Sarah Robb-O’Hagan explains how an expertly compiled team of unique skill sets can create a brighter future for your business. With strategies she used while leading major global companies, Sarah will share what it means to build and contribute to an “extreme team,” how to work through intergenerational workforce dynamics and how to bring out the best in your employees.

Get Out of Line: Step Up, Stand Out & Succeed

When Sarah Robb O'Hagan was starting out as a marketing associate with the Virgin Group, her CMO abruptly left, creating a vacuum in the department. After identifying a lack of leadership, Sarah drafted a 30-page marketing proposal, slipped it under the company President's door, and immediately got promoted. Sarah's career has taught her innumerable lessons about succeeding in life and business, but the moist important is this: You don't get promoted for just showing up and doing your job - you have to get out of line to deliver more for the team and stand out.