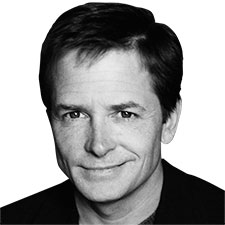 Actor, Author, Film Producer, and Activist
Childhood
Michael J. Fox was born Michael Andrew Fox in 1961 to parents William and Phyllis in Edmonton, the capital of the Canadian province of Alberta. (He later adopted the "J" as an homage to legendary character actor Michael J. Pollard.) Fox, a self-described "Army brat," moved several times during his childhood along with his parents, brother, and three sisters. The Foxes finally planted roots in Burnaby, British Columbia (a suburb of Vancouver), when William Fox retired from the Canadian Armed Forces in 1971.

Career
Like most Canadian kids, Fox loved hockey and dreamed of a career in the National Hockey League. In his teens, his interests expanded. He began experimenting with creative writing and art and played guitar in a succession of rock-and-roll garage bands before ultimately realizing his affinity for acting. Fox debuted as a professional actor at 15, co-starring in the sitcom Leo and Me on Canadian Broadcasting Corp. (CBC) with future Tony Award-winner Brent Carver. Over the next three years, he juggled local theater and TV work, and landed a few roles in American TV movies shooting in Canada. When he was 18, Fox moved to Los Angeles. He had a series of bit parts, including one in CBS' short-lived (yet critically acclaimed) Alex Haley/Norman Lear series "Palmerstown USA" before winning the role of lovable conservative Alex P. Keaton on NBC's enormously popular "Family Ties" (1982-89). During Fox's seven years on "Ties," he earned three Emmy Awards and a Golden Globe, making him one of the country's most prominent young actors.
Spin City reunited Fox with Family Ties creator/executive producer Gary David Goldberg. Together with Bill Lawrence, Goldberg created the series expressly for Fox, establishing it as a joint venture of Dreamworks SKG, Goldberg's UBU Productions, and Lottery Hill Entertainment (run by Fox and partner Nelle Fortenberry, now a member of the Board of Directors of The Michael J. Fox Foundation). Goldberg served as co-executive producer with Fox for Spin City's first and second seasons, and Lawrence stepped in during the third. For the fourth seasons, Rosenthal and Cadiff shared duties with Fox.
In other television work, Fox starred in Woody Allen's "Don't Drink the Water" in 1994. He directed Teri Garr and Bruno Kirby in an episode of "Tales From the Crypt" and later directed an installment of the series "Brooklyn Bridge."
Fox also had time during his busy TV work to become an international film star, appearing in over a dozen features showcasing his keen ability to shift between comedy and drama. These include the Back to the Future trilogy, The Hard Way, Doc Hollywood, The Secret of My Success, Bright Lights, Big City, Light of Day, Teen Wolf, Casualties of War, Life With Mikey, For Love or Money, The American President, Greedy, The Frighteners, and Mars Attacks!
Fox married his "Family Ties" co-star, actress Tracy Pollan, in 1988. Together they have four children. Inspired to find projects that his kids would enjoy, Fox has lent his voice to a variety of hit children's films since the early 1990s. He began as Chance the dog in Disney's Homeward Bound movies. In December 1999, he provided the voice of Stuart Little for the Sony feature of the same name, and in the summer of 2001 Fox's voice was heard as that of the lead in Atlantis The Lost Empire, his first animated feature for The Walt Disney Co.

Living and working with Parkinson's disease
Though he would not share the news with the public for another seven years, Fox was diagnosed with young-onset Parkinson's disease in 1991. Upon disclosing his condition in 1998, he committed himself to the campaign for increased Parkinson's research. Fox announced his retirement from "Spin City" in January 2000, effective upon the completion of his fourth season and 100th episode. Expressing pride in the show, its talented cast, writers, and creative team, he explained that new priorities made this the right time to step away from the demands of a weekly series. Later that year he launched The Michael J. Fox Foundation for Parkinson’s Research, which the New York Times has called “the most credible voice on Parkinson’s research in the world.” Today the largest nonprofit funder of Parkinson’s drug development in the world, the Foundation has galvanized the search for a cure for Parkinson’s disease, and Michael is widely admired for his tireless work as a patient advocate.
In 2012 Fox announced his intention to return to full-time acting. While the announcement may have upended public expectations, Fox had spoken publicly about finding a drug cocktail that helped him control the symptoms and side effects of his Parkinson’s disease well enough to play a character with PD. In 2013, he returned to primetime network TV as Mike Henry on NBC’s “The Michael J. Fox Show.” The show, which quickly gained nationwide attention, centers on a beloved newscaster and family man who returns to work following a diagnosis with Parkinson’s disease. Parkinson’s families and Michael J. Fox Foundation supporters united around the power of optimism demonstrated by Fox’s return, hosting more than 2,000 premiere night house parties around the country to celebrate the airing of the first episode.
Fox also continued to thrill fans in his multi-episode guest arc as Lewis Canning, a devious attorney who uses his tardive dyskinesia to his clients’ advantage, in the CBS hit drama "The Good Wife" starring Julianna Margulies. In 2011, he guest starred in “Larry versus Michael J. Fox,” the season eight finale of Larry David's acclaimed HBO comedy "Curb Your Enthusiasm.” In spring 2009 he portrayed embittered, drug-addicted Dwight in Denis Leary's hit FX Network drama "Rescue Me," a role that earned him his fifth Emmy Award. His 2006 recurring guest role in the ABC legal drama "Boston Legal" was nominated for an Emmy, and he appeared as Dr. Kevin Casey in the then-NBC series "Scrubs" in 2004.
Fox is the recipient of several lifetime achievement awards for accomplishments in acting, including the 2011 Hoerzu Magazine Golden Camera Award and the 2010 National Association of Broadcasters Distinguished Service Award.

Offstage
Fox also is the bestselling author of four books. His most recent memoir, No Time Like the Future: An Optimist Considers Mortality, was published on November 17, 2020. A Funny Thing Happened on the Way to the Future, a compendium of wisdom for graduates, was published in April 2010. Always Looking Up: The Adventures of an Incurable Optimist, published in April 2009, debuted at number two on the New York Times bestseller list. It was accompanied by an ABC-TV primetime special that was nominated for an Emmy for Outstanding Nonfiction Special; additionally, its audio recording by Fox won the 2010 Grammy award for Best Spoken Word Album, an honor for which all three books were nominated. His first book, the 2002 memoir Lucky Man, also was a New York Times and national bestseller.
Fox is the recipient of honorary degrees from The Karolinska Institute in Sweden, New York University, Mount Sinai School of Medicine and the University of British Columbia. He also has received numerous humanitarian awards for his work and was appointed an Officer of the Order of Canada in 2010.
Fox has spoken and written extensively about his predisposition to look at challenges, including his Parkinson’s disease, through a lens of optimism and humor. His message has always been one of gratitude for the support he has received from his fellow Parkinson’s patients, and hope and encouragement for every decision to take action — no matter how big or small — to help advance the pursuit of a cure.
Read More Read Less