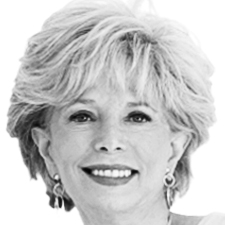 Award-Winning Broadcast Journalist and 60 Minutes Co-Editor
Lesley Stahl, one of America’s most recognized and experienced broadcast journalists, has been a 60 Minutes correspondent since March 1991. The 2016-17 season marks her 26th on the broadcast. Stahl’s 2013 series on Guantanamo Bay, in which she gained unprecedented access to its prison facilities was honored with an Edward R. Murrow award in 2014. In the same year, she won two Emmys, her 10th and 11th, one for the Guantanamo series and another for an eye-opening story about China’s huge real estate bubble. Among Stahl’s crowning achievements is the Life Time Achievement Emmy she was awarded in 2003 for excellence in reporting.

After four decades as a reporter, Stahl says the most vivid and transforming experience of her life was not covering the White House, interviewing heads of state, or any other of her stories at 60 Minutes. It was becoming a grandmother. Stahl’s Becoming Grandma: The Joys and Science of the New Grandparenting was released April 2016. The New York Times best-seller explores how grandparenting changes your life – for the better – with personal stories and interviews with famous and the not-so-famous grandmothers, as well as scientists and historians.
Read More Read Less
Tuesday, November 09, 2021 / 11:00 AM - 11:45 AM EST

Around the World with 60 Minutes Lesley Stahl

With the candor and charm that has helped her become a journalism icon, Stahl discusses her professional and personal life as one of the first female television reporters. First hired by CBS News in 1972, she entered an industry that was male-dominated, but she broke through and made a name for herself. With humorous and poignant anecdotes, Stahl talks about her covering the White House during the Carter, Reagan, and George H.W. Bush presidencies, and then about her years covering the world as co-editor of 60 Minutes. She comments of the news of the day, as well as some of the major stories she covered in the past, including Watergate, the Iranian hostage crisis, and every presidential election since 1972. She also talks about the state of the news business and the difficulties of working and raising children.