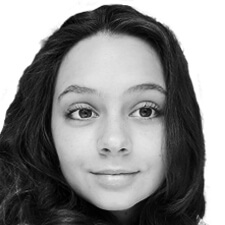 Student Speaker
Valkyrie Holmes is the co-founder of Project Firefly, a drone tech startup that aims to fight wildfires with pressure waves. They've since pivoted to Ember Bazaar, a marketplace for landowners and land-tending companies to post and accept jobs tending forests and fighting climate change. Valkyrie was recently accepted into the 776 Fellowship, a program that gives 20 young people in climate tech 100k over two years to bring the project to life. She’s had the privilege of interning at SpaceX in Falcon Engineering, researching for NASA's SEES Program, and attending a rigorous electrical engineering and computer science course taught by professors and students of MIT's Women in Tech Program.
Valkyrie wants to work in interesting spaces that have been previously unexplored and learn anything and everything to bring new possibilities into these worlds! For the last few months, Valkyrie has been working with the World Fair Geocache to create an AR mystery game for next year's unveiling. She is also working on a startup that protects agents, brands, and creators from deals falling through by providing an insurance/incentive program for them and their fans.
Read More Read Less