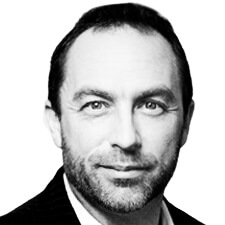 Founder of Wikipedia
Ranked by Forbes Magazine as a “Web Celeb”, Jimmy Donal Wales is a U.S. Internet entrepreneur, wiki pioneer, and technology visionary, who is best known as the Founder of Wikipedia, an international collaborative free content encyclopedia on the Internet, and the Wikimedia Foundation. He is also the founder of WikiTribune, a groundbreaking ad-free news platform that produces evidence-based journalism, and co-founder of Wikia, a privately owned free web hosting service he set up in 2004.
The origins of Wikipedia began in March 2000, when Mr. Wales started Nupedia (“the free encyclopedia”), which was characterized by an extensive peer-review process designed to make its articles of a quality comparable to that of professional encyclopedias. With the addition of wikis (a collection of web pages designed to enable anyone who accesses it to contribute or modify content), the project was dubbed “Wikipedia.” Mr. Wales laid down the founding principles and content, establishing an Internet-based community of contributors during that year. Wikipedia was initially intended to be a wiki-based site for collaboration on early encyclopedic content for submission to Nupedia, but Wikipedia's rapid growth quickly overshadowed Nupedia's development.
In a 2004 interview with Slashdot, Mr. Wales explained his motivations about Wikipedia, “Imagine a world in which every single person on the planet is given free access to the sum of all human knowledge. That's what we're doing.”
The success of the project has helped popularize a trend in web development (called Web 2.0) that aims to facilitate creativity, collaboration, and sharing among users. As Wikipedia expanded and its public profile grew, Mr. Wales took on the role of the project's spokesperson and promoter through speaking engagements and media appearances. His work with Wikipedia, which has become the world's largest encyclopedia, prompted TIME Magazine to name him one of its “100 Most Influential People,” in 2006 in the “Scientists & Thinkers” category.
In 2003, Mr. Wales founded the Wikimedia Foundation, a nonprofit charitable organization dedicated to encouraging the growth, development and distribution of free, multilingual content, and to providing the full content of these wiki-based projects to the public free of charge. The Wikimedia Foundation operates some of the largest collaboratively edited reference projects in the world, including Wikipedia, the 5th most popular website in the world.
In 2004, Wales co-founded, with Angela Beesley, the for-profit company Wikia, Inc. Wikia is a wiki farm — a collection of individual wikis on different subjects, all hosted on the same website. As part of his work at Wikia, Inc., Mr. Wales is developing a human-powered search engine, Search Wikia, which will be based on the same open, transparent, community-driven principles of Wikia and Wikipedia.
In 2017, Wales founded WikiTribune, an ad-free global news platform that aims to address the idea that “the news is broken and we can fix it.” By pairing standards-based journalism with a team of dedicated community contributors and a crowdfunded business model, WikiTribune ensures articles are fact-checked and un-biased, sources are transparent, and users have the ability to flag and contribute to the articles they read. As citizens’ demand for reliable, fact-based journalism grows ever-louder, Wales is blazing a path forward that will reshape news media.
Read More Read Less
Wednesday, November 17, 2021 / 11:00 AM - 11:45 AM EST

Guest Keynote: Innovation and Resiliency While Remote: Lessons from Wikipedia

One of the most sought-after visionaries in business and technology, Jimmy Wales led a community that built the world's largest and most popular encyclopedia-- the 5th most popular website in the world-- and did it all by working from home. In these engaging and actionable remarks, Wales provides lessons from the Wikipedia experience on remote work, and also bold inspiration on how even amid the current crisis there's opportunity for innovation and re-invention.
An optimistic, forward-looking leader whose work directly shapes society for the better-- Wikipedia has emerged as a trusted source of medical information amid the coronavirus pandemic, with millions of hits daily-- Wales draws on his personal experiences at the forefront of his industry, providing pragmatic lessons on how organization's can embrace change, and lean into new tech in order to become more agile and resilient.