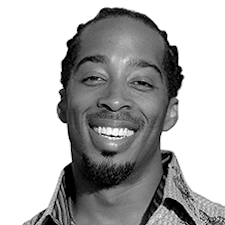 Award-winning Poetic Voice, Entrepreneur, and Two-time National Poetry Slam Champion
Imagine harnessing the power of an engaging opening video, an electric closing performance, and an insightful main stage keynote all in one dynamic presentation. For over 15 years Sekou Andrews has been helping the world’s largest organizations deliver relevant information with riveting inspiration through an innovative, unconventional category of speaking called “Poetic Voice.”

It is no surprise that Forbes Magazine has called Sekou “the de facto poet laureate of corporate America.” His “wow-factor” is in high demand with the world’s most successful organizations, including Google, Viacom, Toyota, Nike, Cisco, Linkedin, Global Green, Paypal, ASAE, The Gap, General Mills, TEDx, YPO, Capital One, L’Oreal, Autodesk, ACLU, Intuit, and the NBA to name but a few. Sekou has also emerged as an inspiring voice for health and wellness, routinely evoking tears, cheers, and standing ovations at events for clients such as Johnson & Johnson, United Healthcare, Mayo Clinic, Blue Shield, TEDMED, Roche, Genentech, and the American Nurses Association.

Many of Sekou’s clients share a similar journey with his work. It begins with the words “Why would we want poetry at our leadership meeting?” and ends with the words “highest rating opening of our event, ever” and “only speaker invited back.” Sekou’s talks on disruption are in such demand because they literally embody disruption on stage, charging audiences to disrupt themselves to access their individual innovation. His keynotes on dynamic communication and storytelling show leaders how to deliver dense data through beautifully human presentations. From bold thinking and success, to healthcare and tech, Sekou’s speeches are rich with actionable insight that help attendees connect more deeply with their communities, become more influential leaders, and unlock greater possibilities.

Sekou has now returned to the classroom, teaching his rockstar secrets to public speakers through his highly effective Stage Might™ speaker training system, that helps executives, influencers and leaders become more dynamic communicators by applying the techniques of master performers to business stages.

With all of the innovation and inspiration that is poetic voice, Sekou Andrews is accomplishing the seemingly impossible – bringing spoken word to the world’s largest stages, while redefining the notion of what a speaker is… and what a poet can be.
Read More Read Less