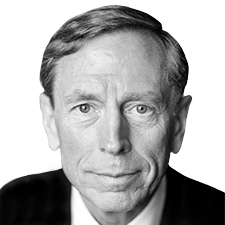 Director, CIA (2011-2012); Commander of U.S. and International Security Assistance Forces-Afghanistan (2010-2011); Partner, KKR
General David H. Petraeus is one of the most prominent U.S. military figures of the post-9/11 era. He has been described as a leading warrior-intellectual and “one of the great battle captains” in American military history. Following his military service, he served as Director of the CIA. He is now a Partner with the global investment firm KKR and Chairman of the KKR Global Institute. During his 37-year career in the United States Army, General Petraeus served in Cold War Europe, Central America, the United States, Haiti, Bosnia, Kuwait, Iraq, Afghanistan, and the greater Middle East and central Asia.

He was most widely recognized for: his oversight of the organization that produced the U.S. Army’s counterinsurgency manual and overhauled all aspects of preparing leaders and units for deployment to combat; for his leadership of the Surge in Iraq; and for his command of coalition forces in Afghanistan. He culminated his military career with six consecutive commands as a general officer, five of which were in combat, a record believed unmatched in the post-World War II era. A graduate with distinction from the United States Military Academy, General Petraeus is the only person in U.S. Army history to be the top graduate in both the U.S. Army’s challenging Ranger School and the year-long U.S. Army Command and General Staff College course. He also earned a Ph.D. in an interdisciplinary program of international relations and economics from Princeton University’s Woodrow Wilson School of Public and International Affairs and later completed a fellowship at Georgetown University’s School of Foreign Service.

He taught both economics and international relations at the United States Military Academy in the mid-1980s and, after leaving government in late 2012, he was Co-Chairman of a Council on Foreign Relations Task Force on North America and a visiting professor of public policy at the City University of New York’s Macaulay Honors College for 3-1/2 years. After General Petraeus’ retirement from the military, following confirmation by the Senate by a vote of 94-0, he served as Director of the CIA as the Agency played the central role in a number of achievements in the global war on terror, established a strategic campaign plan for the Agency, and pursued initiatives to invest additional resources in the Agency’s most important element, its human capital. General Petraeus has been Chairman of the KKR Global Institute for over five years and a Partner with the firm for more than three-and-a-half years.

He is also a member of the board of Optiv (a global provider of cyber security services), a Judge Widney Professor at the University of Southern California, a Senior Fellow at Harvard University’s Belfer Center, the Senior Vice President of the Royal United Services Institute, the Co-Chairman of the Woodrow Wilson Center’s Global Advisory Council, and a member of the boards of several other think tanks and over a dozen veterans service organizations. Over the past dozen years, General Petraeus has been named one of America’s 25 Best Leaders by the U.S. News and World Report, a runner-up for Time magazine’s Person of the Year, the Daily Telegraph man of the year, Prospect magazine’s Public Intellectual of the Year, a Time 100 selectee, one of Foreign Policy magazine’s top 100 public intellectuals, and the recipient of the Madison Medal at Princeton University. He is a frequent commentator on global security and economic issues. In recent years, his pieces have been published in the Washington Post, New York Times, Wall Street Journal, Financial Times, Foreign Affairs, and Foreign Policy, and he has also appeared frequently on various TV news programs and documentaries. General Petraeus has been awarded numerous U.S. military, State Department, NATO, and United Nations medals. He has also been decorated by 13 foreign countries.
Read More Read Less
Wednesday, October 19, 2022 / 09:00 AM - 09:45 AM EDT

A highly decorated general and one of the most prominent combat commanders in American history, Gen. David H. Petraeus, USA (Ret.) dedicated his life to public service, ultimately leading the military campaigns in Iraq, Afghanistan, and the greater Middle East, and then serving as the director of the Central Intelligence Agency. Drawing on his 38-1/2 years in government, his academic endeavors, and his current role as a Partner in the global investment firm KKR and Chairman of the KKR Global Institute, General Petraeus will explore the current tensions of the global economy, geopolitics, the US economy, the US-China relationship, supply chain disruptions, as well as business and consumer behavior. Assessing the challenges during this unprecedented time, General Petraeus will share understanding of the world today and a look at the future that lies ahead.

Join us for a fireside chat with Guest Keynote Speaker General David H. Petraeus. During this session, we’ll dive deeper into the ideas and concepts addressed in his keynote focused on leadership in changing times.