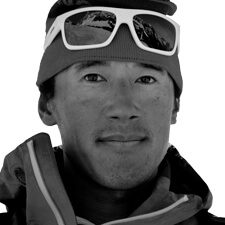 Award-winning filmmaker, photographer and athlete
Jimmy Chin is one of the greatest adventure artist-athletes of his generation. He is equally respected for his groundbreaking climbing and skiing achievements in wild mountains as he is for his storytelling through photography and film. He is an Academy Award-winning film director for Free Solo. A New York Times Best Selling author. A professional climber and skier and 20+ year member of The North Face Athlete Team. He has traveled to all seven continents, led cutting-edge expeditions around the world, and has partnered with many of the best adventure athletes and explorers today.

Jimmy has a resumé of historic climbing and ski mountaineering achievements. In 2006, he completed the first successful American ski descent from the summit of Mount Everest with Kit and Rob DesLauriers. Five years later, Jimmy, Conrad Anker, and Renan Ozturk captured the coveted first ascent of the notorious Shark’s Fin, an imposing granite wall on India’s Meru Central. The list could go on and on. It is clear that Jimmy has figured out a way of managing risk to result in the greatest of rewards.

As a photographer, Jimmy’s work documenting expeditions and climbs from the Sahara to the Himalaya has been featured in numerous publications, including National Geographic Magazine, The New York Times Magazine, Vanity Fair, Outside Magazine and others. In 2019, he was awarded the National Geographic Photographer’s Photographer Award by his peers. His first book of photography documenting his career in the mountains, There and Back, became a New York Times Best Seller in 2021.

In addition to his extensive commercial film work for the likes of Ford, Apple, Bose, Chase, and Yeti, Jimmy creatively partners and co-directs with his wife, Elizabeth Chai Vasarhelyi. Together, they directed the award-winning documentary Meru, which earned the Audience Award at Sundance and was shortlisted for an Academy Award. Free Solo, their documentary about Alex Honnold’s historic solo climb of Yosemite’s El Capitan, won an Academy Award for Best Documentary Feature, a BAFTA and seven Primetime Emmy Awards. Free Solo had the highest grossing opening weekend in history for a documentary. The film eventually grossed $29 million dollars at the box office. Jimmy and Chai’s latest documentary, The Rescue, about the daring rescue of 12 boys and their coach from a cave in Thailand, has won numerous awards including the People’s Choice Award at Toronto International Film Festival and was shortlisted for an Academy Award.

CIO Experience Lunch: There and Back

Academy Award-winning filmmaker, National Geographic photographer and world-class athlete Jimmy Chin will share stories and insights from a career in the mountains, exploring his own limits and documenting the lives of others who do the same. Join us for this compelling presentation as Jimmy shares his unique perspective on risk management, the importance of preparation, and commitment when it counts.