Functional leaders in the U.S. take different stances toward political expression in the workplace — but political talk is happening on the job anyway. Consumers fear violence in reaction to the outcome and the erosion of democracy, but both ends of the political spectrum share some common values.

Fast word on tactics and concerns from thousands participating in our conference calls and polls.

More detailed role-specific reports may be available on the website, depending on your subscription.

Because executives in HR, marketing, communications and risk have told us they worry about how to handle politics in the workplace and the marketplace, we’re offering post-Election Day survey results from 500 employees and nearly 300 consumers — the people you’re concerned about. They say they are experiencing distraction and fear, against a backdrop of pandemic and recession.

But one category of workers tells us they are more able to stay focused on their jobs and an additional survey of consumers surfaces some common values on both ends of the political spectrum.

The following early findings are a snapshot; we don’t yet have a detailed picture of the impact of various approaches on either workers or consumers.

The day after polls closed in the U.S. presidential election, 32% of employees there told us their organization encourages political dialogue, 32% said their employer discourages it and 36% said that their workplace neither encourages or discourages it. In an interesting twist, only 12% of employees working for organizations that neither encourage nor discourage political discourse say it’s affected their ability to get work done. That’s lower than the 17% at enterprises discouraging such talk and significantly lower than the 47% where political expression is encouraged.

And many among the buying public fear violence in reaction to the outcome and worry about the erosion of democratic processes. Conservatives and liberals described starkly different social values for the most part — but both groups are drawn to authenticity, comfort, health and serenity.

But these glimmers of a path forward are just that — glimmers.

Even in organizations that discourage political discussions, 77% of employees are still having them, at least some of the time (see Figure 1). 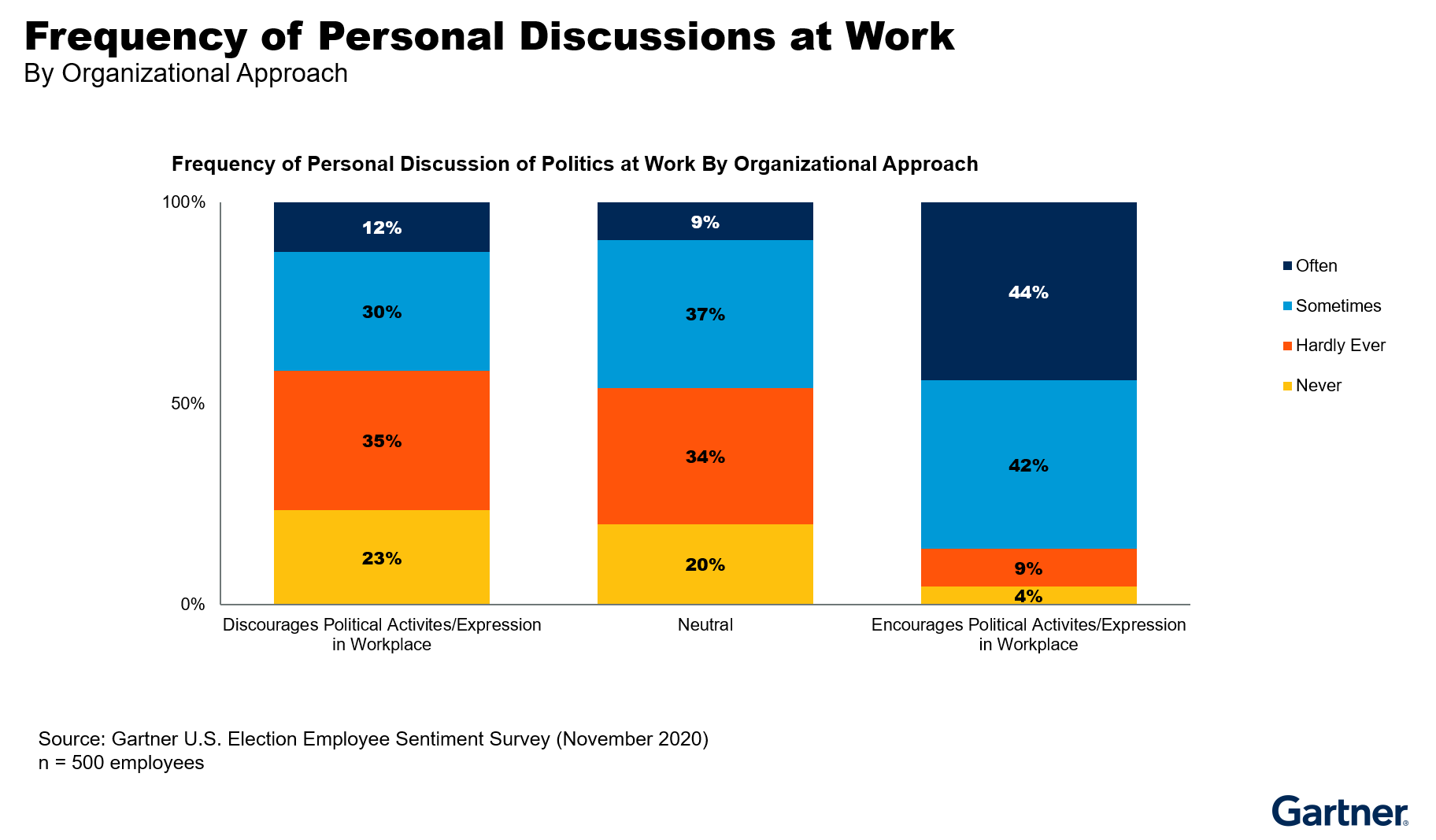 At first glance, businesses that welcome political expression seem to offer a positive environment. Employees who described their workplace in that way said political conversations were interesting or informative, while those where it’s discouraged are more likely to describe those interactions as stressful and/or frustrating (see Figure 2). 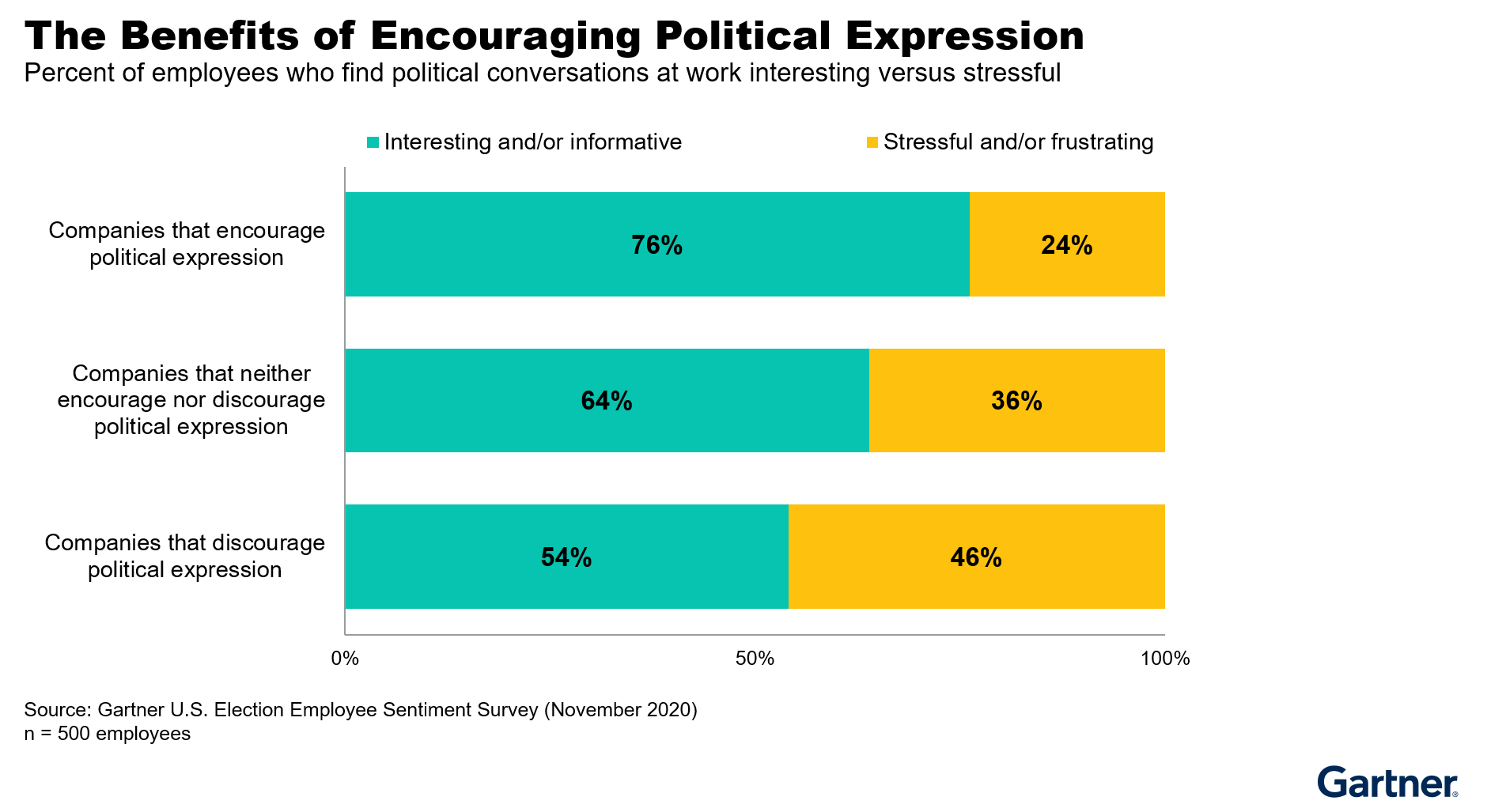 Yet in those same organizations where political discussion is encouraged, employees were also more likely to report incidents of exclusion or aggression. They said they saw (see Figure 3):

Among employees who say their workplace tries to stop political conversation, the percentages drop:

But employees in organizations that stay neutral (by neither encouraging or discouraging political expression) are the least likely to report these same negative side effects: 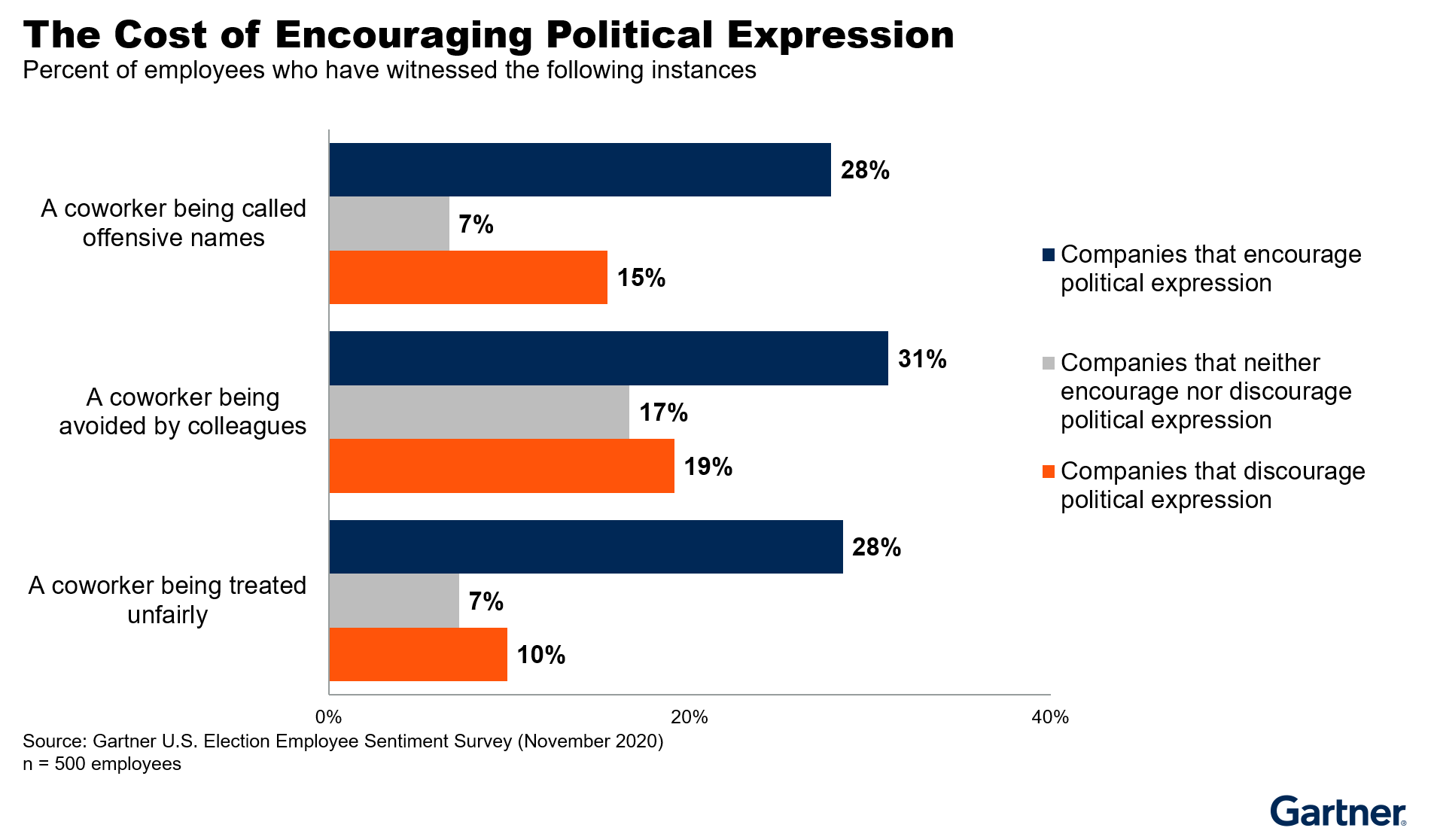 No wonder senior management is the most likely group to be preoccupied with politics at work. Respondents to our workforce snap polls told us most recently that they spent an average of 55 minutes each week talking about the election and related issues on the job. The distraction factor has been rising all year, even as companies faced pandemic, disruption and recession (see Figure 4). 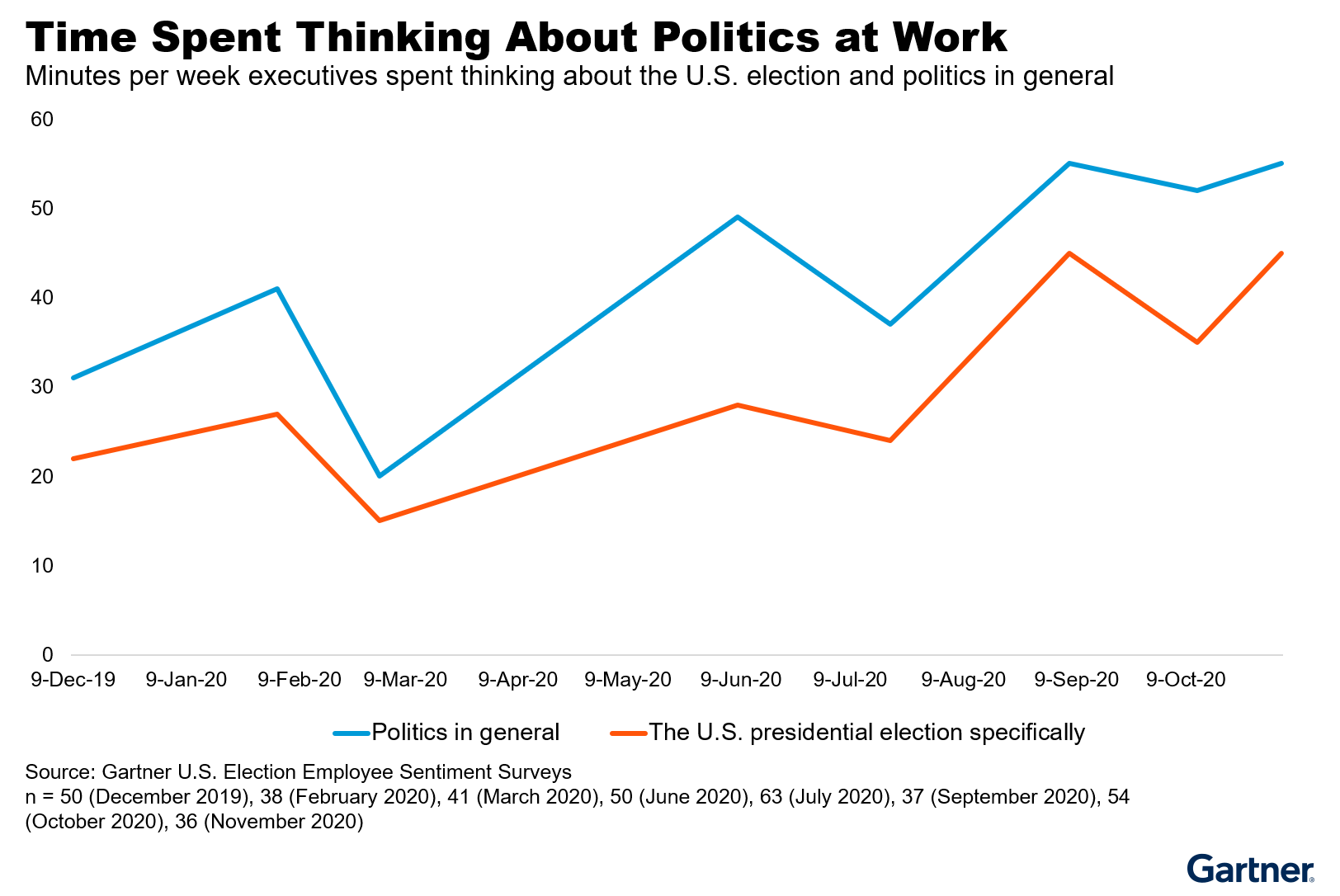 Immediately following the election, we asked a panel of 292 U.S. consumers about their biggest concerns. Among those selected by at least 40% of participants were (see Figure 5): 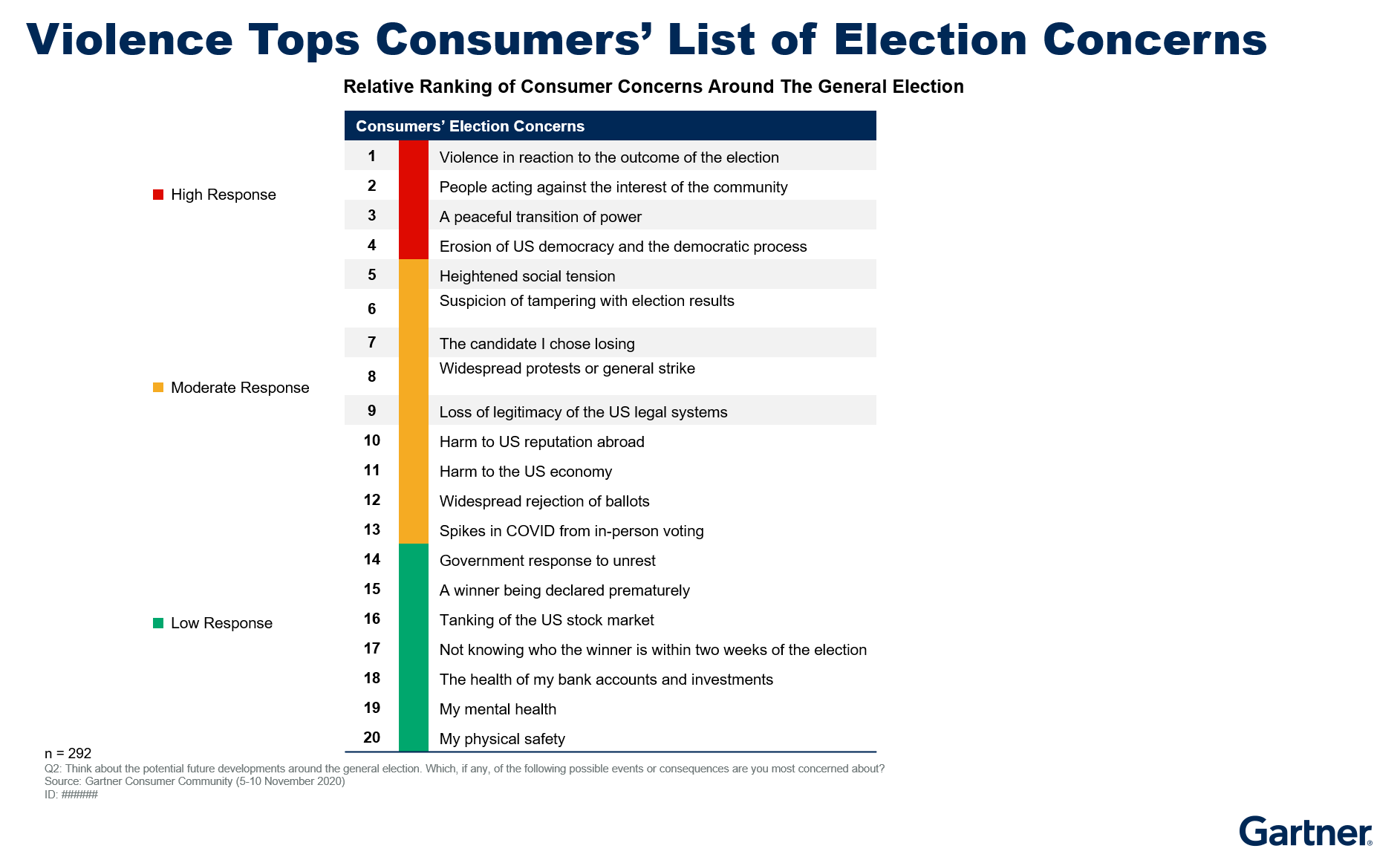 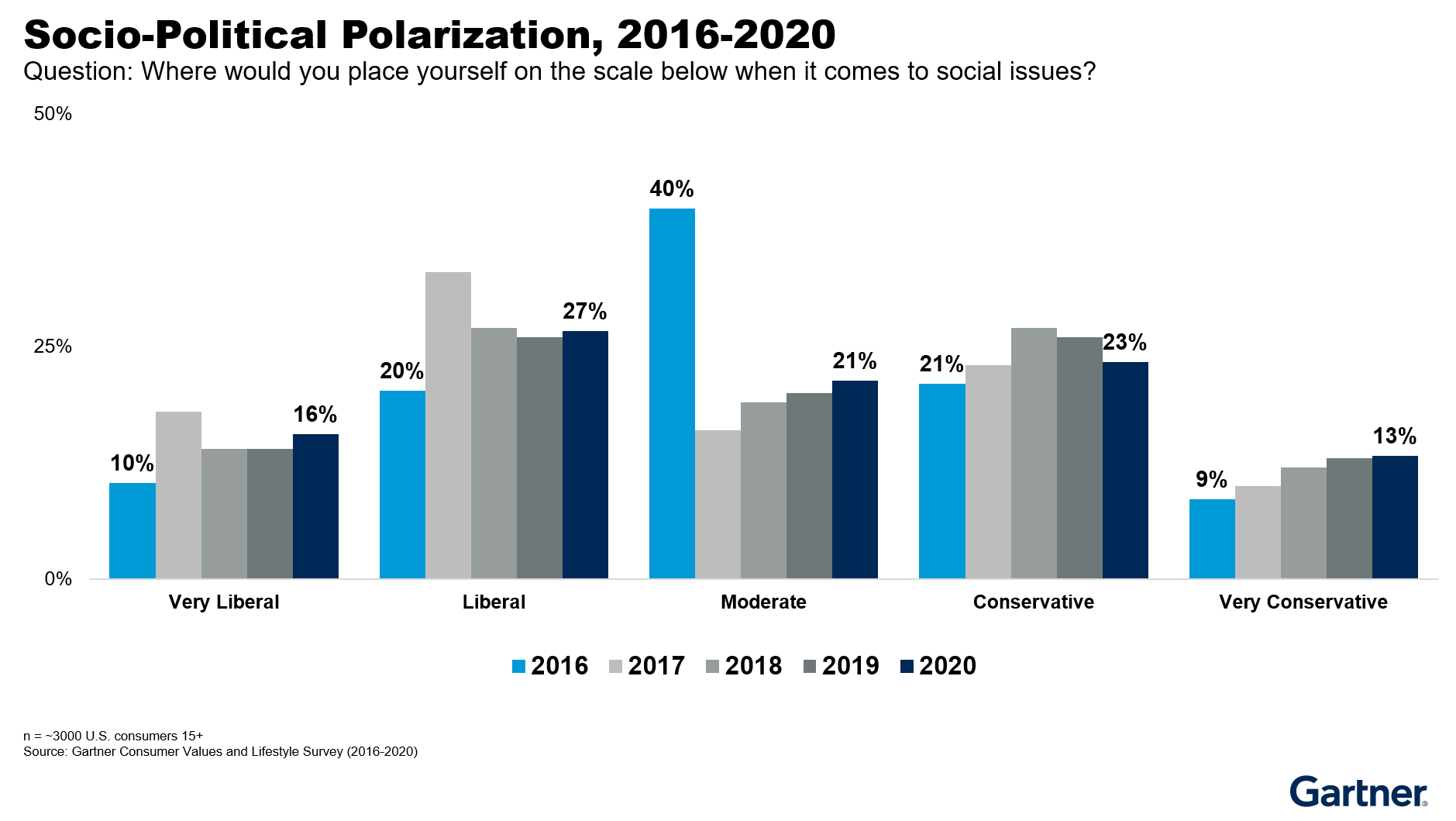 Respondents then answered questions about the importance of a set of basic values.

These were the two biggest gaps (see Figure 7): 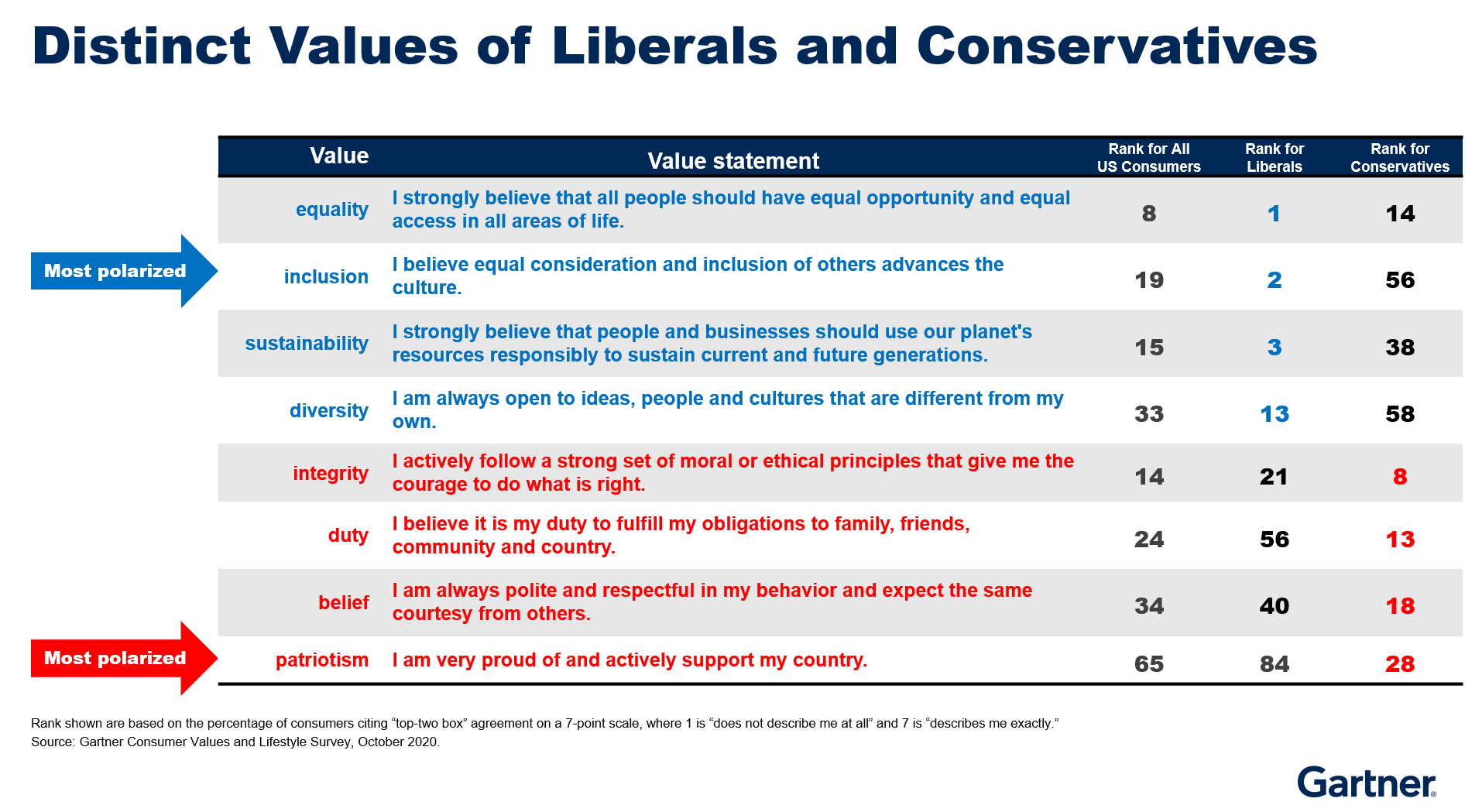 Those on both ends of the political spectrum assigned similar importance to a handful of common values, including (see Figure 8): 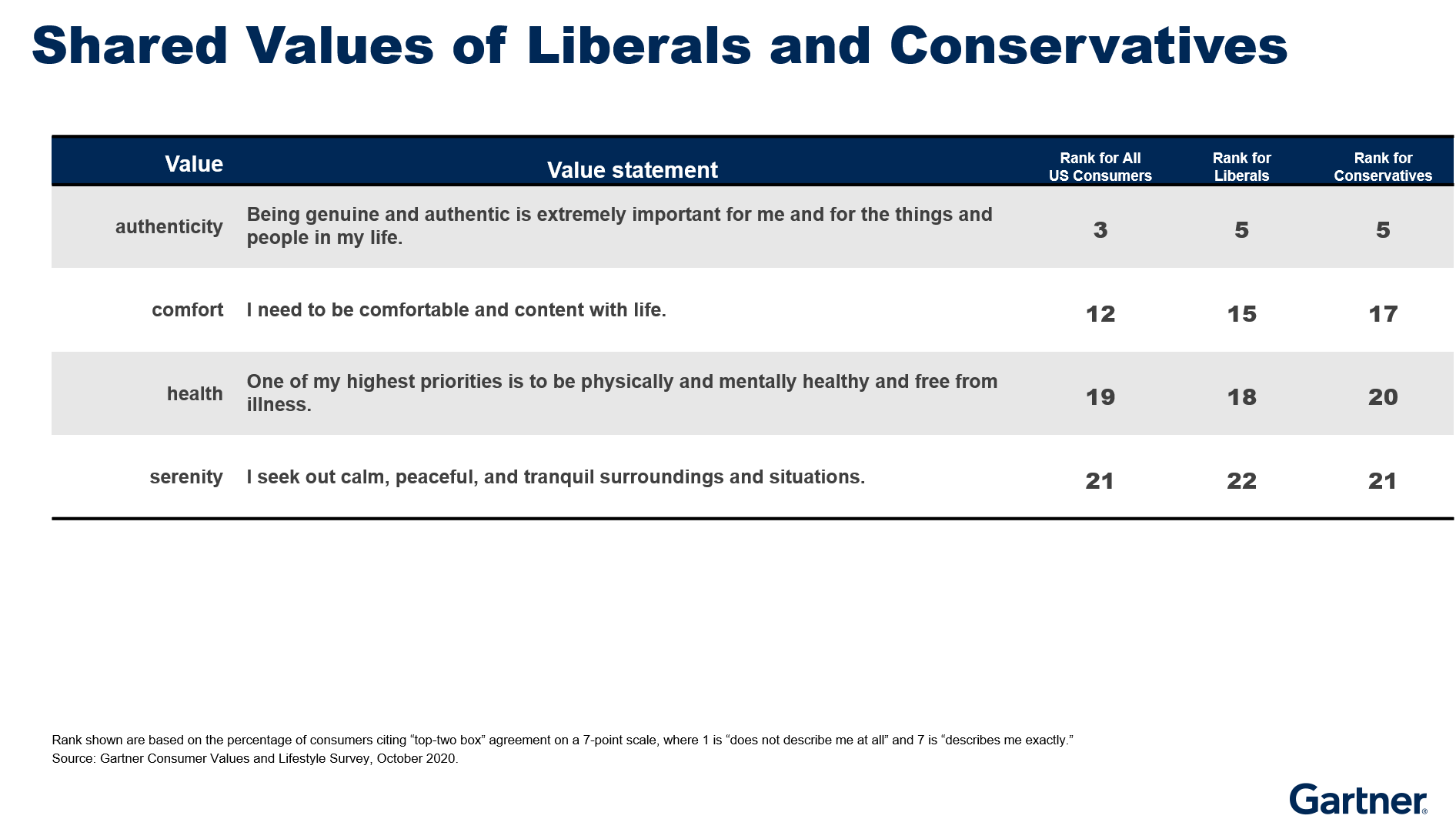 Recommended by the Authors

While risk management and audit leaders see the COVID-19 surge and challenges related to remote work as top emerging threats, political divisions in the U.S. are making it difficult for executives there to focus on their jobs. They are discussing politics at work and getting into arguments more often than last year — at higher rates than employees at lower echelons.

Executives continue to invest in data and analytics despite their ongoing discomfort with the results and the practical difficulties of embedding the findings into their decision making.

After navigating through the unexpected storm of COVID-19 change using standard remote support, IT leaders are pressing ahead with more advanced technology — such as the Internet of Things, digital twins and artificial intelligence.

Corporate leaders throughout the organization are starting to gather the lessons of the 2020 crisis to be better positioned to withstand future shocks and pursue new growth. Some have already found ways to roll these take-aways into their operations, risk management and business model changes.

While strategists tell us they are weighing the potential for upheaval along different fronts to affect their company’s future, most executives say their organization lacks a formal process to track and respond to disruptions. That will change. And in finance, sales, R&D and HR, functional leaders are already adjusting the way they plan.

The impacts of COVID-19 need a cross-functional response. Access all of our research to help your partners in assurance, supply chain, HR, IT and others act quickly and confidently. You’ll find tips, toolkits and other planning advice.