Many organizations struggle for real business ROI of their social marketing activities and can benefit from stronger strategy, purpose, and understanding of what formula drives compelling activations.

For every post, tweet, retweet and like, digital marketers struggle to connect their social marketing activity to outcomes. “Social marketing is still an adolescent,” declared Julie Hopkins, research director at Gartner for Marketing Leaders, in her session, 20/20: State of Social Marketing Practice, at the Gartner Digital Marketing Conference. However, marketers can learn from their peers’ best practices such as the advice shared by Cory Edwards, head of Adobe’s Social Media Center of Excellence, who emphasized that meaningful content evokes emotion, it inspires real-time conversation, and requires an evergreen strategy.

According to Gartner research, social marketing was one of the top five highest investment areas for marketing technology in 2014. However, these budgets come with higher expectations and often ROI goes under measured. Ms. Hopkins advises clients who wonder how to move forward with strategy, measurement and vendor questions, to understand their social marketing maturity. The majority of social marketing programs hover in stages 2 (Sharing) and 3 (Engaging) of the Gartner Social Marketing Maturity Model. Often, those companies with robust social marketing haven’t yet reached Stage 5 (Optimizing), where social marketing is part of an integrated digital marketing program. 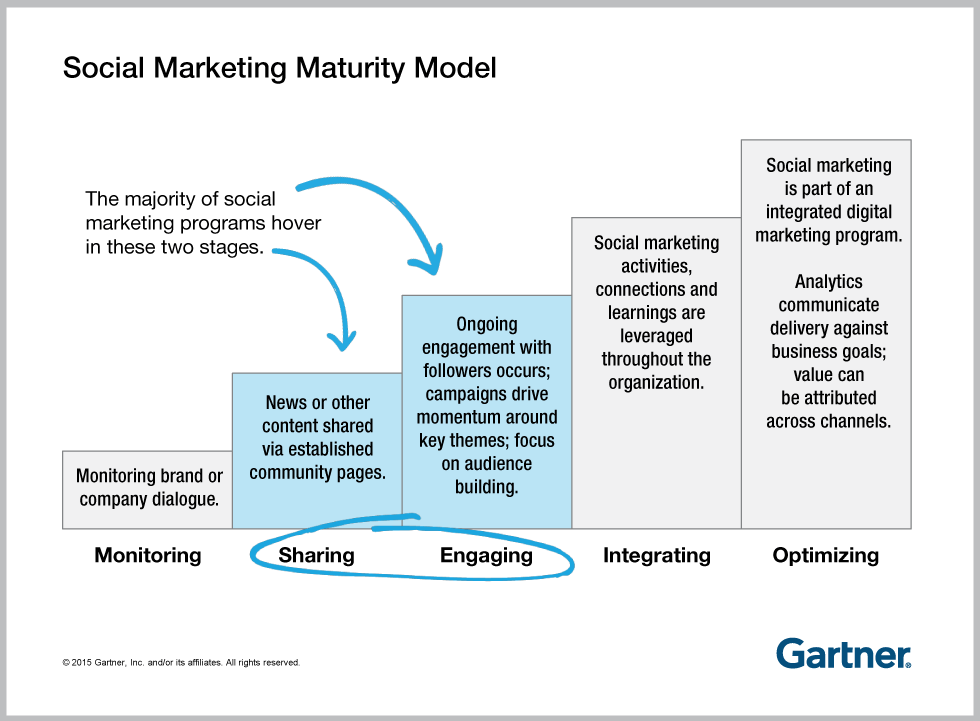 As a digital marketer, it’s key to revisit your strategic imperative and ensure that it defines a mutual purpose from the customer side (motivation to participate) and from the company side (measurable business need).  When organizations lack this strategic imperative, social marketing programs fail due to an imbalance or a complete lack of purpose. Even if you “win,” it is more difficult to connect and communicate the impact on business objectives.

Don’t be tempted by fairy dust

Additionally, marketers should realize that social marketing is not just chatting with followers on a Facebook page. The value is not in establishing the digital link or connection, but in the dialogue that can follow. This extends into how marketers think about engagement on other social networks. Instead of feeling pressure to be present across the burgeoning array of emerging social networks, learn what’s happening on new networks and apply that to your understanding of audiences, content, what drives engagement, and how you can better connect and message on behalf of your brand. Understand whether there’s a dialogue to be had, and if it’s meant to be had by, and with, your brand. It may also be necessary to grow through better leveraging of social advertising, especially since organic reach has dropped. Of added importance: Don’t attempt to grow through what Ms. Hopkins called the “fairy dust” of social marketing – that ever present urge to create the huge hit that goes viral.

For Mr. Edwards, head of Adobe’s Social Media Center of Excellence, it’s necessary to create a mindset of innovation and metrics that matter. He suggested that those businesses disillusioned by social media spend too much time chasing trends and not supporting the jobs to be done. In his work leading social for the Adobe business units, Mr. Edwards said he focuses heavily on creating meaningful content and compelling activations.

“30% of leads in Adobe’s marketing cloud have read some SME content and these leads are 178% more likely to convert to sales.” – Cory Edwards

For example, when Adobe sought content from its subject matter experts (SMEs), it struggled with the challenge of getting them to create and contribute content on a regular basis. By creating an SME activation program, Adobe paired writing resources with the SMEs to extract their knowledge. Writers would interview the SMEs, submit a draft, and then finalize and publish the content. Over 800 pieces of content have been published across Adobe and media channels and show real business ROI: 30% of leads in Adobe’s marketing cloud have read some SME content and these leads are178% more likely to convert to sales.

“Meaningful content means an evergreen strategy,” Mr. Edwards said and added that it’s important to define the key areas for which a brand wants to be known. Sometimes, he noted, a brand does obtains that social “fairy dust” as Adobe did with the recent social media storm around #thedress, which pitted the opinions of social media users in a debate over whether the same image of a cocktail dress appeared black and blue, or white and gold. One woman used Adobe color to settle the debate. Adobe’s share of the conversation? 31,000 tweets and 46 million impressions. And while the buzz was noteworthy, even more so was the real business ROI: The number of downloads for the Adobe color app more than doubled that week.

While Mr. Edwards noted that there is no “silver bullet” to creating compelling activations, he summarized their research into what drives audience engagement as the need for content that is simple, participatory, connected to something happening in the moment, that evokes an emotion, and that encourages “spread” through organic and paid marketing efforts.

3 Steps for Marketers to Prepare for a Cookieless World

Top Marketing Predictions for 2020 Reveal Risks of Influencers and Personalization

“I use Gartner to bolster my confidence in decision making.”