The race is on to establish the next generation of mobile networks. Each generational change in wireless networks has been prompted by a different force.

New service demand sparked the move from 1G to 2G, regulation and licensing were the triggers for the migration to 3G, while network obsolescence was the underlying cause behind the move to 4G.

"While 5G is still in the early stages of development, we've never seen the emphasis on investing in the next generation of communications capabilities come so far in advance of settled standards," said Will Hahn, principal analyst at Gartner.

When it comes to what will trigger the move to 5G, Gartner has identified three scenarios. 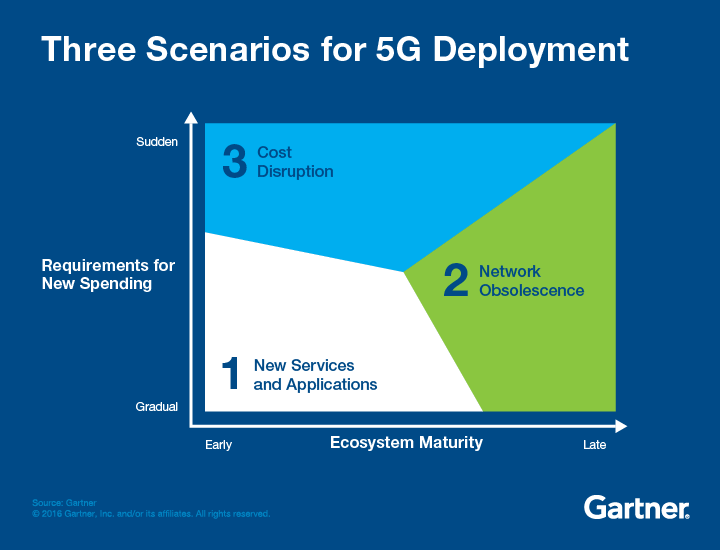 Three main arguments support the probability of this scenario:

However, the challenges for 5G services are diverse, especially for communication service providers (CSPs) that will need to invest in the network infrastructure, but may not be the main beneficiaries of the economic value created. Other considerations that could lead to the delay of 5G deployments include challenges from alternative access technologies, such as Wi-Fi networks, a lower than expected demand for the IoT and the weak global economy, which may delay device replacements and upgrades in the near term, resulting in more moderate mobile data consumption.

“ To prove its worth, 5G will need to find appropriate applications ”

Three key drivers also exist for this scenario. First, the continuous increase of mobile data traffic will drive 5G emergence and 4G obsolescence. This leads to the second driver — the fact that mobile CSPs simply don't have significant radio assets to satisfy the projected data traffic demand in the 2020s. It makes far more sense for them to insist on the importance of 5G (over existing 4G) to acquire larger and more continuous bandwidth channels. The third driver is the rising importance of network "softwarization."

To prove its worth, 5G will need to find appropriate applications, such as ultrareliable and low latency communications that existing cellular extensions do not cover. Advancements in network technologies are also required, while the replacement of existing devices with 5G-capable ones will have to keep pace.

"The gradual replacement of the 4G network is likely to be a prime indicator of these scenarios, whereby 5G will occur along highways, in dense metro city centers and other busy zones. In other more rural and less-travelled places, however, 4G could linger," said Mr. Hahn.

Little has been said about the potential cost benefits of 5G, although this will be a dominant priority for CSPs that are under intense pressure to restore margins. In considering large immediate outlays for 5G capabilities, CSPs will have to realize cost benefits above any other factors.

"We can expect discussions of disruptive cost savings to increase going forward," said Mr. Hahn. "However, cost considerations will be of less importance if solutions and services requiring 5G performance mature within the next few years; operators will have to move to them regardless."

On the other hand, if network requirements allow substantial reuse of 4G spectrum and equipment without as great a need for new purchases or licensing, operators will adopt them more gradually. Finally, if regulators launch expensive auctions for new spectrum (as with some 3G auctions), this will negate the case for a move to 5G based on cost savings.

Connect with the leading IT and business executives to get the latest insights on tech trends and drive product innovation for business growth and more.

Market Trends: What Will Be the Catalyst for 5G?

IT Spend Forecast, 4Q21 Update: Where Next?

The Technology General Manager Agenda: Priorities and Best Practices for 2022