Brexit is a test of agility and resilience for global supply chain models.

It’s been more than two years of uncertainty since the U.K. voted to leave the European Union (EU). After months of negotiation, the U.K. and EU agreed on a Brexit deal, but it was rejected this month by members of the U.K. Parliament at the House of Commons, extending the period of ambiguity around how Brexit will impact businesses and supply chains.

A Gartner survey found that 69% of European and 42% of North American risk, audit and compliance leaders say that Brexit uncertainty or conditions could have a moderate, major or worse effect on their company’s revenue.

“Preparing supply chains for the post-Brexit future has been challenging for businesses due to the lack of progress in reaching a post-Brexit trade agreement between the U.K. and the EU. There are huge uncertainties surrounding the end state of trade deals, tariffs, alignment of standards and jurisdictions,” says Lisa Callinan, Vice President, Gartner.

Despite the slow pace of progress on trade negotiations, most companies have started preparing their supply chains and logistics networks to respond to an eventual agreement. Whatever the outcome of the U.K.’s exit from the EU, the result will be a test of the agility and resilience of global supply chain models in the midst of a period of significant change and uncertainty. Nevertheless, most companies are evaluating different scenarios and estimating the impact on their business. 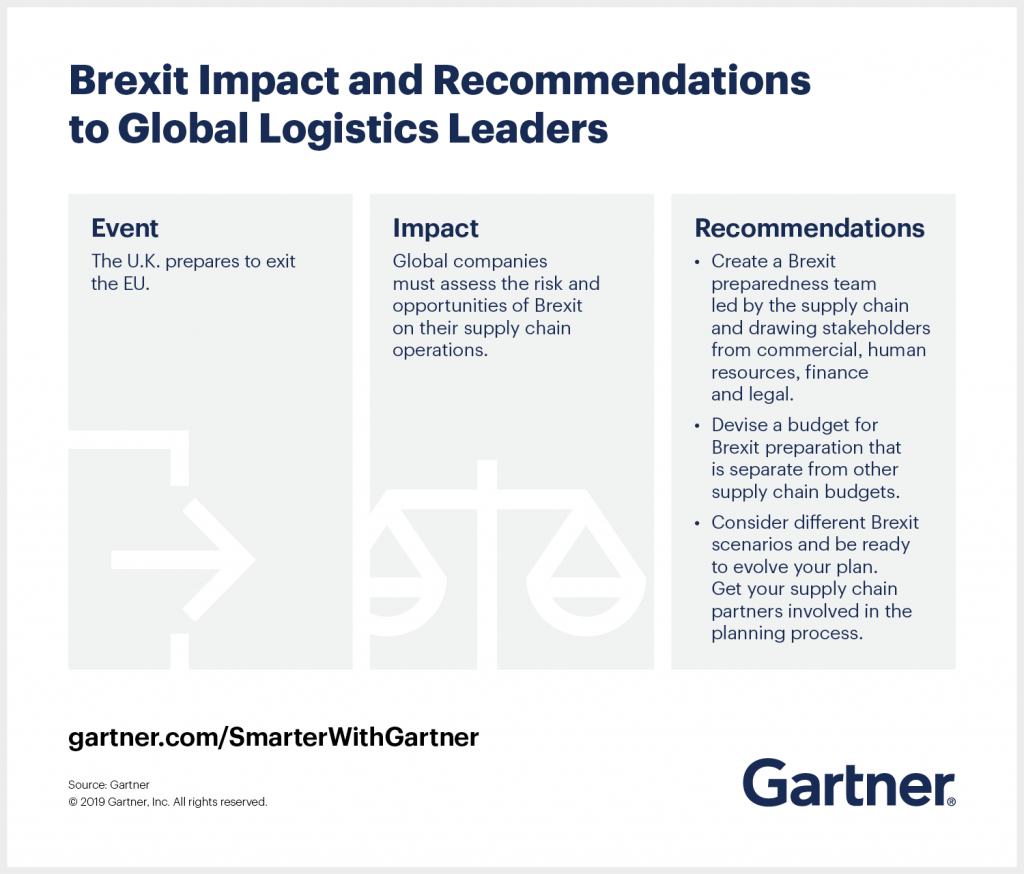 The U.K. imports far more goods from the EU than it exports. The EU will want to protect the lucrative U.K. export market as much as the U.K. will want to maintain good relations with its EU neighbors. Furthermore, logistics leaders should acknowledge that technology can cope with the potential administrative burden of import and export customs controls, and Brexit should not result in significant upheaval and expansive changes to logistics technology platforms.

As new processes and procedures are incorporated, allow for longer delivery lead times and the potential cost impact of trade between the U.K. and the EU.

The Brexit effect has the potential to create substantially more demand variability. Professional services companies are already advising clients throughout Europe to cut spending as a precautionary measure. On the supply chain side, this means developing a range of different business scenarios as part of the sales and operations planning process.

“With the U.K. still scheduled to depart the EU on March 29, 2019, the recent rejection of the withdrawal agreement by the U.K. Parliament has thrown the manner of that departure into further doubt,” says Callinan. “Until a clear position exists, it will be especially difficult to create any reliable long-range plans for supply and demand in the U.K. and other EU countries.”

Deal or No Deal? How to Prepare your European Supply Chain for the Impact of Brexit

The 2023 Gartner Power of the Profession Supply Chain Award Winners