The Gartner 2017 CIO Agenda urges all organizations to seize the digital ecosystem opportunity.

When customers begin the home-buying process, it’s often a time-consuming and convoluted path. But Denmark-based Danske Bank decided to use an ecosystem of partners and businesses to create a system that was easy to use, intuitive and full service.

The online portal, called Simple, combines customer data (such as finances) with house market listings. The result is an estimate of taxes, as well as heating and electricity costs associated with buying the home. Eventually the bank began offering a financing arm and “journey aggregator,” which ties users into an ecosystem of realtors and information and service providers.

Apps like Simple herald the next phase of going digital: the digital ecosystem.

“ A digital ecosystem amplifies the reach of a company”

“Digitalization in most enterprises is maturing, and as it does, it becomes more likely that these enterprises will become part of a digital ecosystem," said Andy Rowsell-Jones, vice president and research director, in his session at Gartner Symposium/ITxpo 2016 in Orlando. "Many will need to shift their enterprises from a linear, value chain business trading with well-known partners and adding value in steps, to being part of a faster and more dynamic networked digital ecosystem."

“A digital ecosystem amplifies the reach of a company. It enables scalable connections between known partners and customers but also provides a medium for unknown parties to connect with one another."

“ The end goal is to reach digital escape velocity”

Ecosystems are an interdependent group of actors (i.e., people, things, enterprises) sharing standardized digital platforms to interact with one another to fulfill some commercial or civic purpose.

The Gartner 2017 CIO Agenda: Seize the Digital Ecosystem Opportunity analyzed how 2,598 CIOs from across 93 countries and all major industries setting their 2017 agendas are responding to the age of the ecosystem. The survey found top performers in ecosystems outpace typical and trailing performers, with top performers expected to double their ecosystems in the next two years. The end goal is to reach digital escape velocity, where the organization is moving so fast as compared to peers that it escapes their influence. Organizations need to focus on escaping biases, habits, system and culture gravity to move toward new digital goals.

The survey revealed that the top performers focus on three areas: technology, organization and leadership. 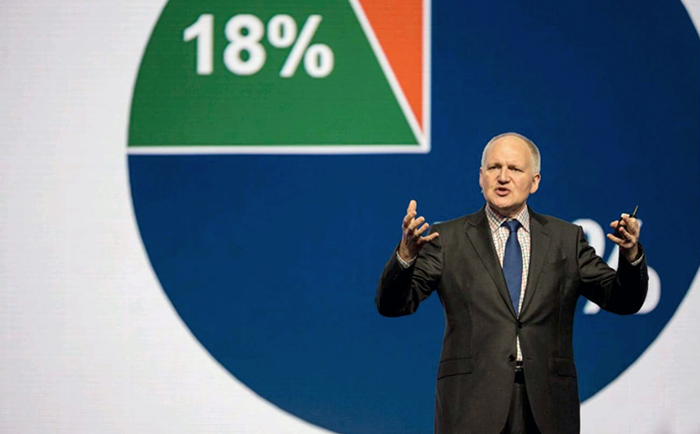 Although construction is considered a traditional, asset-heavy industry, that didn’t stop Swedish enterprise NCC Industry from embarking on a digital business journey. The company used an “internal startup” to pitch different initiatives, and in 2016, launched “Loop Rocks,” a peer-to-peer site for the exchange of secondary building materials.

Top performers like NCC Industry recognize that startups — and their approach to digital business — are companies designing digital products without the constraints of corporate policies or technical debt. Additionally, they assume their technology will plug directly into the digital ecosystem. While NCC Industry chose to create an internal startup with principles mirroring a real startup, it’s also possible to acquire or fund startups to gain access to their innovation and technology.

As for the technology core, BI and analytics remain as the top technology investment, followed by cloud services/solutions and digitalization/digital marketing. The CIO Agenda also notes that transforming the core might now mean building more technology in-house. Top performers found the technology they were looking for was so progressive that no one else was building it or startups were creating the technology, but not on an industrial scale. However, typical and trailing performers might not be in a position to build in-house, the implication being that they are relying too heavily on outside innovation or not creating transformational technology. These organizations need to plan aggressively to expand partner pools, or risk being unable to reach escape velocity.

At Australia’s Deakin University, students will encounter a different kind of help service. The Deakin Genie, a virtual personal assistant, guide and super-portal, was developed in-house at the Digital Future Lab of university CDO William Confalonieri when he realized there were no outside options for buying the technology. But it was really the ideation, and not the technology, that was the important part of development.

“For top performers, a combination of Mode 2 and external partnerships is critical to achieving success,” said Mr. Rowsell-Jones. In fact, the CIO Agenda survey found that 68% of top performers have adopted bimodal techniques versus only 17% of trailing performers.

Closer alignment of IT and business goals, as well as increased innovation, are the benefits nearly all companies are realizing when they adopt bimodal techniques. However, bimodal comes at a cost. Culturally, companies run the risk of resentment between the “cool team” on Mode 2 and the “old team” on Mode 1. But, in reality, the two modes must evolve together. Financially, investing in the technology core and in talent with the right skill sets will run at a higher cost.

Michael Newcity, senior vice president and chief innovation officer at ArcBest, a freight, transportation and logistics company, has some advice for CIOs in the digital world. “You’ve got to get out of your office.” CIOs need to understand and align with the business priorities of the company to create a higher level of satisfaction among stakeholders. Newcity suggests weekly or daily lunches with people on the business side, as well as sitting in on staff meetings for business units.

When it comes to digital leadership, top CIOs are looking beyond simple cost optimization in IT to prioritizing business value. High performers are looking to free up resources to reinvest in higher-return areas versus simply reducing cost. Yet, the top performers are more likely to meet their cost reduction targets by managing cost reductions in commodity IT to liberate resources for higher-return areas.

Moving forward, CIOs should create their digital-ecosystem-ready leadership action plan. Most important, said Mr. Rowsell-Jones, is to “Form a clear view of your current leadership situation, devise a realistic plan for addressing it, choose a few areas of focus and move forward on them.”

Technology Priorities CIOs Must Address in 2023

Technology Priorities CIOs Must Address in 2023