Embrace Instability for the Digital World

In 1997, Netflix began mailing DVDs to people’s homes, disrupting the traditional video rental industry. In 2007, it launched a streaming service. In 2013, the company began producing its own content. In the amount of time it would take a traditional company to scale one version of itself, Netflix scaled up three versions. 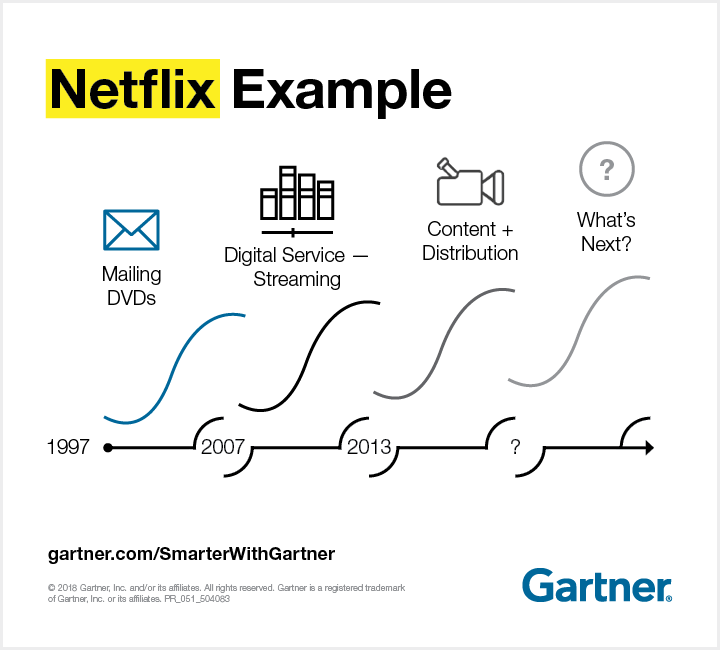 Netflix was set up for venture scaling. The business was designed to optimize the existing business model to enable rapid innovations. This meant also having an enterprise capable of repeatedly jumping s-curves to new business models.

What is venture scaling?

Venture scaling is a combination of continuous innovation and rapidly scaling winning ideas to drive material business outcomes. Enterprises are good at coming up with ideas, but not great at scaling up those ideas to the point of financial returns.

“Only companies with venture-scaling capability will survive a challenge from the likes of Amazon, Netflix, Alibaba or Tencent,” says Graham P. Waller, vice president and distinguished analyst at Gartner.

Enterprises should be deliberately designed to be unstable. Traditional industrial businesses were designed with stability in mind, but that leaves them unable to quickly respond in a digital world.

Change your center of gravity

Think about digital business as it compares to breakthrough performance improvements in modern fighter jets. For decades, traditional combat planes were designed with a central tenet of aerodynamic stability. However, in a modern fighter jet the center of gravity is shifted backward, making the design inherently aerodynamically unstable. But it’s that instability that allows the plane the advantage of being able to turn sharply. Fighter jets are able to maneuver so quickly that pilots depend on a fly-by-wire system to maintain a stable flight.

When applied to a business, this means that the “center of gravity” — the ability to make decisions — moves from the top of the chart down to the product/platform team. This enables the business to venture scale and move quickly in the marketplace. Just as sticking to an old design principle for stability would have been dangerous in aircraft, this design in business thwarts new ventures. Changes to the core seem to threaten established structure and processes, but enterprises that cling to industrial-era tenets won’t be able to respond to disruptors or digital business.

The goals is to adopt a new management mindset and an organizational capability to adapt to the changing world of digital business. Organizations built specifically for stability won’t survive the digital business era. Executives might cite barriers to success such as culture, resources and talent, but those are only barriers for enterprises trapped in an industrial-era mindset.

Identify other enterprises that have moved in this direction as examples that it can be done successfully and form a plan for your enterprise to take small steps toward a new design.

2021 Strategic Roadmap For The Composable Future Of Applications

Tips To Pursue and Traps To Avoid in the Great Reopening

Ask the Expert: The Gartner Top 10 Strategic Technology Trends for 2022

Tips To Pursue and Traps To Avoid in the Great Reopening