“ Our ambition is to become the world leader again. We’re building a program that will allow us to leapfrog other countries.”

Speaking to more than 1,500 CIOs and senior IT executives at Gartner Symposium/ITxpo in Australia, Mr. Brugeaud said the departments had a large number of disparate technologies and service providers.

"Where there was a big piece of infrastructure that was supported by an external provider, Immigration made one decision and Customs made another," he said. “We’re simplifying that as much as we can.” At the same time, Mr. Brugeaud’s team is working to restore the agency’s reputation as a global technology leader. 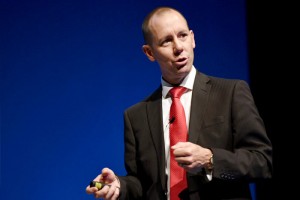 Australia was one of the first countries to implement SmartGate technology in 2007, but Mr.Brugeaud said the country has fallen behind. “Our ambition is to become the world leader again. We’re building a program that will allow us to leapfrog other countries,” Mr. Brugeaud said.

The Department spends more than $500 million on technology each year. As CIO, Mr. Brugeaud supports both traditional IT systems and what Gartner calls operational technology, such as closed-circuit TV, UHF radio and equipment that detects illicit substances.

The IT organization’s goal is to make the traveler experience as smooth as possible, while improving border security, using emerging technologies to stay ahead.

When an Australian radical used his brother’s passport to travel to fight in Syria, the event served as a catalyst to expedite the technology implementation by one year.

People who have travelled through Australian airports recently will have noticed that international departures are now managed largely by automated gates, for any nationality, for chip and non-chip passports.

“ The Department faces increasing volumes and complexity across all areas of its business.”

As events occur in the world, Australia’s risk settings are reset and the Department must ensure that the right people and goods are granted permission or intercepted at the borders.

As well as operating in a complex and volatile international environment, the Department faces increasing volumes and complexity across all areas of its business. The number of international air and sea travelers, air cargo consignments and Australian citizenship applications have all grown strongly in the past few years.

The Department of Immigration and Border Protection is moving towards an automated no-touch process for border clearance, with a goal of processing 90 percent of travellers electronically by 2020.

SmartGates will be equipped with "contactless technology" at major airports beginning May 2017. Trials started last month.

In the future, the arriving traveller may first complete pre-registration using a kiosk or mobile device, then progress through a ‘race’ that uses sensors and biometric matching to identify an individual for screening.

“If there is nothing interesting about a person entering the country, they can pass freely,” Mr. Brugeaud said. “It’s a very different experience, absolutely no contact.”

Thermal imaging scanners and software may be used to identify travellers at airports who become highly stressed or agitated on the approach to passport control or customs. Although the technology has been used to detect potentially ill passengers for some time, it hasn't been applied in a border clearance context.

“If somebody has an abnormally high temperature that may lead you to believe that they may be nervous about what they're about to agree to," said Mr. Brugeaud.