How Leaders Prepare for IoT’s Year of the Customer

CIOs need to lead the charge as more companies deploy Internet of Things for customer-facing use.

The Internet of Things (IoT) is a game changer, but until now it has largely labored behind the scenes to improve efficiencies. For example, your single-use coffee maker might have been manufactured in a facility that uses software, sensors and wireless connectivity to optimize production. From a warehouse facility that uses IoT to streamline handling, the coffee maker might be delivered by a driver whose route is dynamically updated based on traffic conditions and remaining delivery addresses.

This year, expect to see a more visible generation of IoT, according to Chet Geschickter, research director at Gartner.

First, “IoT is moving toward mainstream adoption in 2016,” he said. A November 2015 Gartner survey of IT and business leaders showed that “The number of organizations adopting IoT will grow 50% in 2016, reaching 43% of organizations overall,” he said. 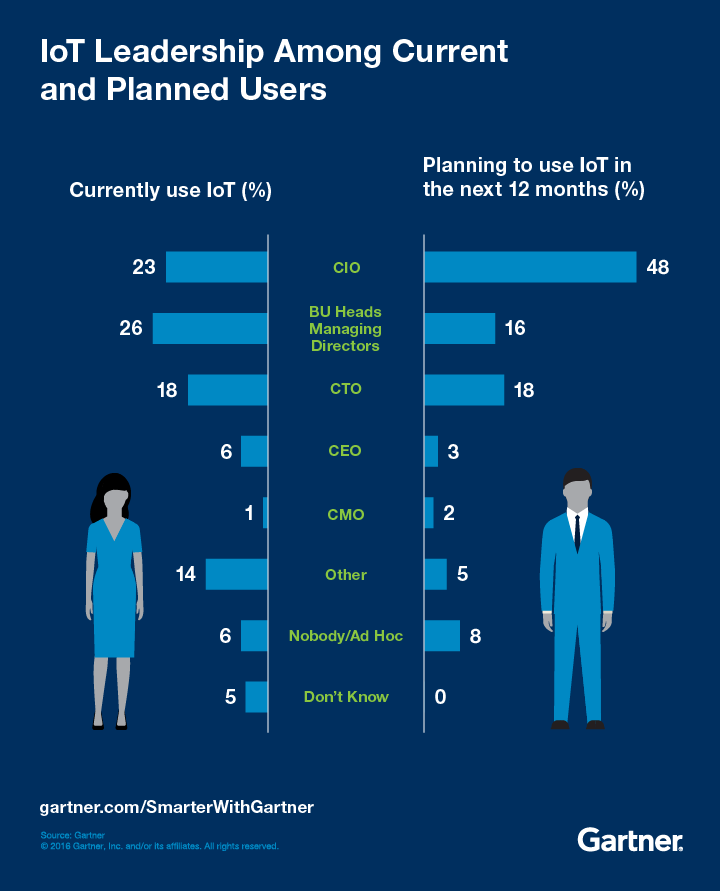 This shift toward customer benefits might mean that your single-serve coffee maker may be equipped with sensors that automatically replenish your supply of pods (thereby, selling more coffee) or to analyze consumption to suggest an “extra strong” blend for early risers.

If IoT becomes part of the discussion in your organization, what are the top priorities? Technology? Security? According to the Gartner survey, those issues aren’t the biggest IoT challenges.

When survey respondents, including those with organizations that have already deployed IoT,  were asked about the three biggest barriers to the success of IoT, business- and “people”-focused issues comprised the top-three roadblocks cited.

Here’s how respondents ranked the challenges:

Surprising — or not? Think about the massive convergence of not just things, but also business applications, data analysis, infrastructure and partners that IoT demands — all of which require orchestration, vision and leadership.

When asked about leadership, the majority of organizations that are currently using IoT point to directors in their business units. Most organizations planning to deploy IoT in 2016 position CIOs in the leadership role.

If you’re a CIO entering or introducing discussions about IoT, Mr. Geschickter’s advice is to “Collaborate with other leaders, such as the CMO, business-unit heads and executive leadership, to identify business benefits that could be achieved with IoT.”

Next, plan a Mode 2 pilot project to validate what benefits are possible. From an organizational standpoint, he said, assign a pilot project leader and conduct a skills gap analysis. Be prepared to augment existing resources with outside expertise if necessary, but “Plan to centralize leadership of IoT across the enterprise under the CIO or CTO.”

More detailed analysis is available for Gartner clients in “Early Adopters of Internet of Things Poised to Make 2016 the Year of the Customer” by Chet Geschickter. This research is part of the Gartner Special Report “The Internet of Things: 2016 Action Plan,” which looks at the necessary steps to building and rolling out an IoT strategy.

3 Steps to Start Your RPA Journey

The Gartner Digital Workplace Hype Cycle: Technologies for the Future of Work