Winds of change start blowing in the PCs favor.

After years of shipment declines in the PC industry, there are signs the market is bottoming out, and it should return to positive growth next year. 2015 marked the fourth consecutive year of worldwide PC shipments decline.

Holiday sales did not boost overall PC shipments in the fourth quarter of 2015, hinting at changes in consumers’ PC purchase behavior. On the business side, the Windows 10 refresh had minimal impact on shipment growth, as expected, because most businesses had only just started the testing period before the deployment.

However, 2016 will mark the beginning of the end of this slide. Worldwide PC shipments are forecast to total 287 million units in 2016, a decline of 1 percent year-over-year, and shipments are projected to increase 4 percent in 2017.

Very specific headwinds have driven the PC market down over the past few years (see Figure 1). The earliest, and most impactful, was the tablet, which was a direct replacement of PCs for many consumers, and indirectly it took spending away from users looking to replace their PC.

On top of that, the level of spending on smartphones has skyrocketed. One in five families in the U.S. pay more than $200 a month for their smartphone services. This has taken spend from PCs, and, in some cases, also acted as a direct replacement, as the need for a personal PC is reduced or negated.

The PC industry was also impacted by the exchange rate devaluation, which increased the prices of PCs in many markets. As prices increased 10 percent in countries that had local currency devalued against the U.S. dollar, demand also fell. Consumers have also held back purchases by the fact that there has been no real innovation in PCs. 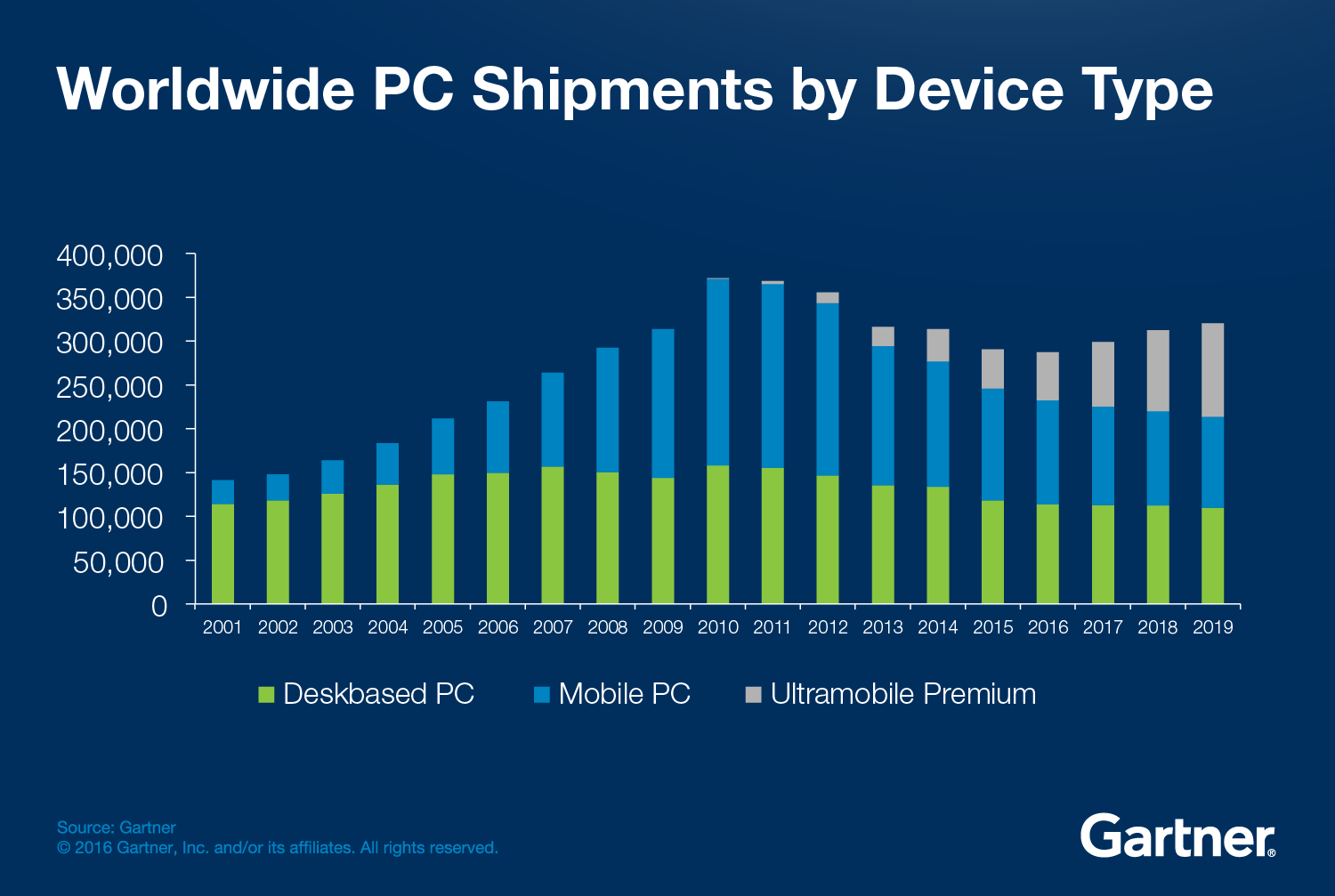 The PC market now has “tailbreeze,” not quite a tailwind. In mature markets, the amount of spend on smartphones is peaking. Apple will not see the same increase in average selling price for the iPhone 7 as it did from the 5 to the 6; this frees up spending for PCs. The significant currency headwind will abate in 2016 and afford a level of pricing stability for PCs. However, the biggest challenge, and potential benefit, for the PC market is the integration of Windows 10 with Intel’s Skylake architecture, which has the potential for new form factors with more attractive features.

The frustration with the capabilities in tablets will drive some consumers and businesses to review new form factors. The PC market is challenged to ensure it meets this demand with the right products at the right price points.

Much of the demand is driven by the need to move to touchscreen and 2-in-1 hybrid devices. The recent return of Samsung to the ultramobile market with the Galaxy brand will help generate more interest. The introduction of Microsoft Surface Pro 3 drew interest from business mobile workers with this 2-in-1 tablet and notebook for productivity and portability.

It seems the market is finally matching the supply of products with the needs of the users. There are even new product fulfilling niche roles, such as the stick PC, ultra-mini PCs and all-in-one desktops. In the future, we can look forward to desktops with added functionalities, including 3D scanner, printer, 3D printer, voice recognition, motion sensor for gesture input and holography. Innovation is returning to the PC.

Gartner Webinar: IT Spending Forecast, 4Q15 Update: What Will Make Headlines in 2016?

How to Deliver Relevant Content Across the Technology Buyer Journey