The Arrival of Algorithmic Business

In the opening keynote at Symposium/ITxpo Orlando, Peter Sondergaard puts algorithms at the center of business growth.

What happens when 30 billion things connect with business and 3 billion people with smartphones? All these things and people generate vast amounts of rich data, and what companies do with that data - how they turn it into proprietary algorithms - will determine how well they maximize the opportunity presented by digital business.

“Algorithms are where the real value lies,” said Peter Sondergaard, senior vice president at Gartner and global head of Research, in the opening keynote to more than 8,500 CIOs and IT leaders at the sold out Gartner Symposium/ITxpo in Orlando. “Algorithms define action."  Digital revenues have risen, IT organizations have gone bimodal, and the increased density of connections promises smart agents and algorithms that can do very complex things, including spawning their own, new algorithms and agents. 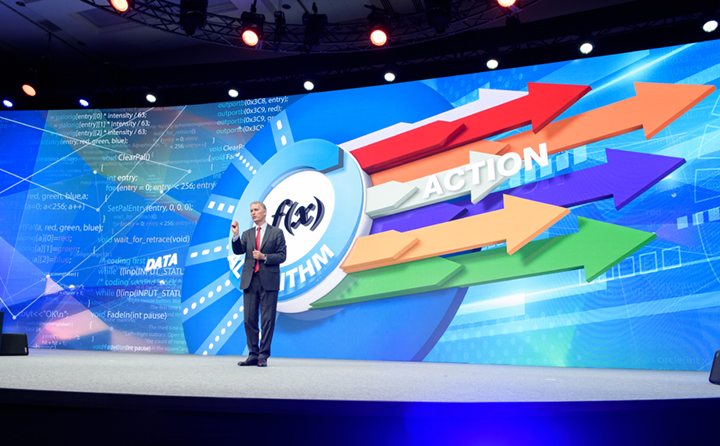 In today’s digital era, dynamic, digital algorithms are at the core of new customer interactions. Back in the day, Coca-Cola created a secret recipe; essentially, an algorithm; for a fountain drink that would build an empire. Today, Amazon’s recommendation engine prompts people to buy more products, or the Waze algorithms give cars better routes based on thousands of independent inputs, changing traffic patterns dynamically in real time. Moving forward, companies will be valued not just on their big data, but on the algorithms that turn that data into actions and impact customers.

Companies will be valued not just on their big data, but on the algorithms that turn that data into actions and impact customers.

Next year, spending on the Internet of Things (IoT) will exceed $2.5 million dollars per minute. Gartner data shows that companies are taking advantage of the IoT opportunity.  As analog revenues flatten, and decline for many industries, businesses are shifting to new sources of growth. For example, Williams-Sonoma, the 50 year-old U.S. retail company, transformed itself to fend off digital upstarts by creating a multichannel digital strategy that marries its physical and digital stores.  Now half of Williams-Sonoma’s revenues are digital.

Gartner surveys indicate that leading CEOs report their digital revenues will increase by more than 80% by 2020. With over half of large enterprises (125,000) launching digital business initiatives, the onus is on CIOs to take a bimodal approach by creating innovative units that run alongside traditional IT operations. To further accelerate the creation of a new digital technology platform, leading companies act as venture investors, buying a stake in small technology startups to guide their direction. They must couple this with a move beyond traditional thinking that stems from established business models.  “Digital organizations start with the customer,” Mr. Sondergaard said. “They don’t ask what the customer wants, they watch what the customer does.”

Making sense of all the data about how customers behave, and what connected things tell an organization, will require algorithms to define business processes and create a differentiated customer experience. Algorithms will evaluate suppliers, define how our cars operate, and even determine the right mix of drugs for a patient. In the purely digital world, agents will act independently based on our algorithms, in the cloud. In the 2020s, we’ll move away from using apps to rely on virtual assistants – basically, algorithms in the cloud – to guide us through our daily tasks. “People will trust software that thinks and acts for them,” Mr. Sondergaard said.

People will trust software that thinks and acts for them.

Take this to another level and the algorithms themselves will eventually become smart by learning from experience and producing results their creators never expected. Eventually, they will spawn other algorithms, creating agents out of agents or robots out of robots. “Therefore, we have to get the algorithms right,” Mr. Sondergaard said. In essence, algorithms spot the business moments, meaningful connections, and predict ill behaviors and threats.

Mr. Sondergaard called on CIOs to be the strategic voice on the use of information, to build the right technology platform, and to become a trusted ally to their CEOs. “Calculate the value of your algorithms,” he said. “Be an algorithmic business.”