The Art of Saying No

Four tactics for CIOs to say "No" to colleagues for the best results.

Picture the last scenario where you had to say no to a colleague. Or, your boss. It may have been a challenging experience.  IT leaders, in particular, may struggle with saying no to colleagues, according to Tina Nunno, vice president and research fellow in her session at Gartner Symposium/ITxpo 2016 in Orlando. “Many clients will say to me, “I’m open to the concept of saying no, but I have no idea how to do it.’”

While there are many different ways of saying “no,” Ms. Nunno suggested that much will depend on where the target sits in the company hierarchy. She presented the following approaches for saying no to colleagues who sit above, below or on the same level with your position.

Saying No to a subordinate

When you’re saying no to someone who reports to you, the goal is to make them feel safe and ensure they want to come back for more input. Whatever the idea was, you want to say no to the situation, perhaps the idea, but not the person. Make it clear that the ideas are welcome and encouraged. Consider keeping a running list of good ideas that are impossible to act on in the moment and, if the ideas are good but not doable, think about rewarding the employee in a performance review. These are good opportunities to build a better relationship and offer guidance on why it didn’t work.

Saying No to a boss

The key to saying no to someone with more power is to demonstrate respect for you boss, while also looking like a strong, confident leader, said Ms. Nunno. First, attempt to either offer a viable alternative or ask your boss if there is an alternative that would meet the end objective, but that also works for all teams. Try to explain why the idea or request doesn’t work within the context of bigger business initiatives or values. It’s easier to accept a no if you can say, ‘This is our growth strategy and here is how that project is counter to that long term goal.”

It’s important to project empathy by saying ‘I understand why you’re asking me for this.’ You need to convey that you appreciate the boss coming to you and asking you.

In the event that your boss should say no to your no, think carefully before you respond. 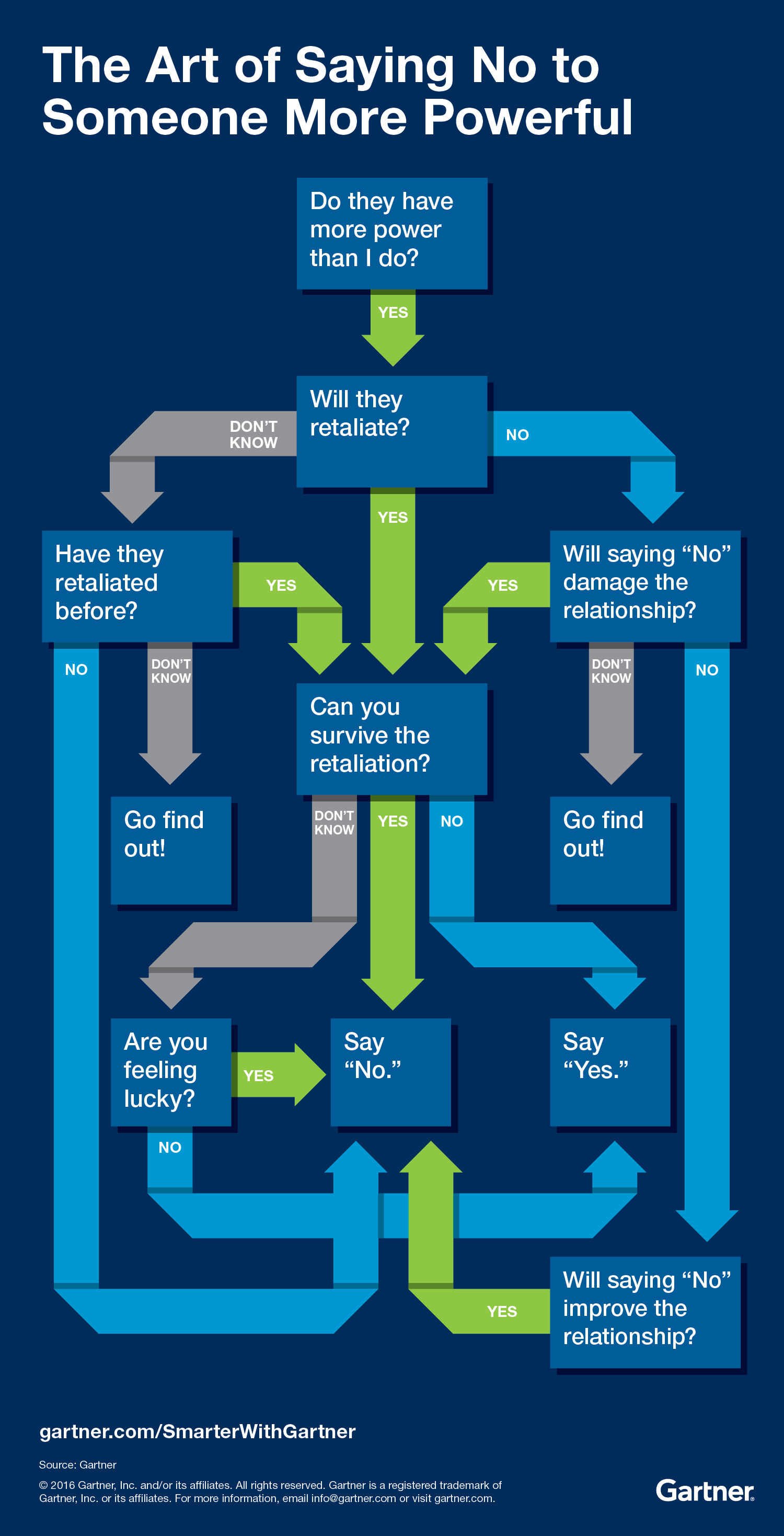 Saying No to a colleague

The primary objective in this situation is to maintain peer status and a healthy relationship. You have similar power, so say no clearly and don’t waver. Don’t say you “can’t” do something, as that might imply you’re not capable. Instead, say you “won’t” do it and apologize with empathy, but not weakness. Importantly, don’t defer the no if you know the answer will be no. If you say maybe later, eventually the colleague will recognize that you meant no and just didn’t tell them, creating a toxic relationship. This is a good situation to consider a conditional no, where you say something such as, “The answer is no unless you can give me time, resources, etc.” You’re setting up a reciprocity, which makes it more of a peer relationship than a customer/service provider.

Saying No to a client

When you say no to a client, you first need to determine your power position. If the client has no control over the no, don’t give them the impression that they do. This is particularly applicable with internal clients. As long as the client believes they are the “customer” they might feel that the customer is always right. In this case, explain the no, but minimize the data you provide when saying no, just say “I’d prefer not to.” This is a good time to remind the client of times when you have been able to say yes, and show that when you’ve had the ability to say yes, you have done so.

Learn how to say no diplomatically. Watch Tina's Facebook Live On Demand.

Mastering the Art of Saying “No” for CIOs

Leadership in the Digital Age

Gartner Panel: Decide If You Should Build or Buy AI