Ivar M Berntz is a team manager in Gartner's Advanced Manufacturing and Transportation group within the Research and Advisory Services area.

Mr. Berntz advises CIOs and senior IT Leaders on strategies, plans, approaches, technologies and processes, their impacts and requirements. He researches on how to leverage frameworks and initiatives like Industrie 4.0 together with information and technology assets to generate IT/OT convergence, accelerate digital transformation and composability for a sustainable attainment of results.

At Gartner, Mr. Berntz was previously part of the CEO and Digital Business Leaders group, with a focus on manufacturing and was the research lead of the Nordics CIO Forum 2017.

Before joining Gartner, he was a Partner with the Brazilian member firm of Deloitte, where he led firmwide (i.e., tax, audit, risk, financial advisory, BPS and consulting) the local relationship with two "Global Crown Jewel" clients, the automotive practice (covering Tier 1-n suppliers, OEMs and dealers), the German "Desk" and the German Multinational Companies initiative. While doing the previous, he also focused on manufacturing, consumer business and retail clients with technology consulting projects. Additionally, he held a seat at the Global Board for Consulting Knowledge Management.

Previously, within Deloitte, he was the innovation champion for consulting, the Brazilian and later the Latin American leader for ERP, and later also for overall technology consulting services.

In parallel, he served as Executive Vice President for an NGO, Programa Comunitario da Reconciliacao, for two terms and on the standing consultative board of Praxis, an ecumenical interdisciplinary think tank.

During the dot-com bubble, he was the CIO for Mundivox Communications, a Brazilian ISP and CLEC. Before that, he held various positions at PriceWaterhouse, ICS, his own firm and for Arthur Andersen management consulting practices, living in Spain, Venezuela, Mexico, Colombia, Canada and the U.S. As an engineer, he worked for Vattenfall in the Organization and Methods for Nuclear Power Plants department where he had previously developed his master's thesis using game theory to optimize nuclear reactor fuel transport movements. 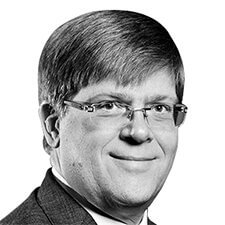 Manufacturing IT Optimization and Modernization

Swedish "Civilingenjor," Royal Institute of Technology, Stockholm, Sweden (at its time, equivalent to a joint B.S. in Mechanical Engineering and an M.S. in Nuclear Engineering)

3The Factory of the Future

What Are Asset-Intensive Manufacturers Looking for in a Total Experience Solution?