Does Your Organization Need a Chief Sustainability Officer?

How it sets up management and oversight is crucial to your organization’s credibility on sustainability and social issues.

When it comes to sustainability, each decision — reporting lines, cross-functional partnerships, accountability — is a signal of how executive leaders view the path to progress. Don’t look for an established blueprint; there is none.

Most often, a stand-alone sustainability or ESG reporting department leads the corporate program, but HR, risk, strategy, operations, internal audit, communications and legal are among the many functions that run point at their companies. A very few businesses have not put anyone in charge.

Watch now: How to Build an Effective ESG Program

“There’s not, in my mind, a ‘right’ model,” said Helle Bank Jorgensen, the CEO and founder of Competent Boards, a Toronto-based executive training and advisory firm. Organizations, she said, need a structure that yields “the insights in order to make informed decisions” and “accountability within management.”

Questions to Ask About Structure

To guide the decision on what leadership structure to use, the general counsel or the executive charged with the issue should ask management and the board:

That reporting line tells investors and regulators that an organization is taking this issue as a strategic imperative, since the leader will be shaping and influencing decisions — according to Andrew Lowe, author of a report on chief sustainability officers and a senior client partner at Korn Ferry.

“A team that reports to the general counsel shows you consider it a legal and compliance issue,” Lowe said. One that reports to finance means you’re putting a premium on what your investors want. If you establish a reporting line to communications, that means you’re making it part of your narrative, though communications rarely has the budget or clout that might be needed to engage the business.

Sustainability teams can be lean by design. In the U.S., for instance, chief sustainability officers on average have six direct reports, and roughly six other staffers are tasked with the issue in other departments. These functions include environment, health and safety; supply chain; communications; and corporate social responsibility, according to a survey by the recruiter Weinreb Group. Four percent of U.S. chief sustainability officers also oversee ESG reporting.

Three sustainability and ESG leaders at companies in France, Canada and the U.S. explained in interviews with us how they operate within their companies. Two report to the CEO, and the third reports to the chief administrative officer. All three have one thing in common: They work with multiple departments to make sure everyone stays aligned.

Olivier Blum serves as Schneider Electric’s chief strategy and sustainability officer, reporting directly to the CEO. The company combines sustainability and strategy into one position on the executive committee to make sure the two are “always fully integrated,” Blum told us.

He acts like the conductor of an orchestra. He and his sustainability team lead the overall effort but also direct and support other departments to implement the initiatives that will help Schneider meet its goals.

For instance, the supply chain is an important part of Schneider’s strategy to cut carbon dioxide releases; suppliers emitted 25 times more than the operational emissions of the company in 2020. So Blum directed a program to help its top 1,000 suppliers cut their carbon dioxide emissions in half by 2025.

In the first quarter of 2021, the company explained this ambition to suppliers in a webinar, followed by a training course in the second quarter. While the sustainability team is involved in setting the big-picture vision, the supply chain leader sees the program to fruition. That supply chain leader also serves on the Group Sustainability Committee, along with executives from governance, HR and communications, while Blum serves as chair. This setup involves executives in projects they will later implement. According to Blum, they’ll have stronger engagement that way.

Together with the CEO, Blum even seeks counsel from a group of academics, policy experts and tech leaders. This external perspective challenges the company’s efforts, and the membership serves — as Blum put it — as a “sparring partner” to push internal stakeholders out of their comfort zone and set more ambitious goals to increase the company’s positive impact.

Blum prods, too. He spends time analyzing other companies’ initiatives — and then tries to raise the bar. For example, in formulating the company’s gender diversity goals in hiring, the HR team told Blum (its former chief human resources officer) that it wanted to increase its goal of having 40% of the company’s new hires be women by 2025. The team proposed a new target of 45%. Blum got the team to agree to a different objective: 50%, full gender parity.

While Suncor Energy, a producer of oil from tar sands, has issued sustainability reports for more than 20 years, the company appointed its first chief sustainability officer in 2017 with a seat on the eight-person executive leadership team.

Martha Hall Findlay, the current officer, said the positioning of the role is critical. “Disclosure is not enough,” she said. “The whole purpose of disclosure is so you can get people to enhance their performance.”

Her major focus: greenhouse gases (GHG) that cause climate change. “We, as an oil sands company, have had a target on our backs — GHG, GHG, GHG — which is, of course, very important,” she said. “We are a big emitter. We know where we need to go on that.”

With the influence that comes from her role at Suncor’s apex, Findlay was a critical driver of a June 2021 alliance with four other Canadian oil sands producers to coordinate on a carbon sequestration hub and other measures. Their goal: net-zero emissions from operations by 2050.5 She worked on the initial concept, coordinated the initiative with the other companies and also helped map out the plan for the program’s three phases.

As sustainability leader, Findlay must focus on other imperatives, too — including strengthening Suncor’s relationship with Indigenous peoples, whose land is the site of many company facilities and operations.

Verizon: Collaborate With Your Internal and External Stakeholders

In 2019, Verizon’s board of directors asked CEO Hans Vestberg to build out a new function dedicated to improving the company’s reporting and stakeholder engagement on ESG — and coordinate the company’s efforts to meet its ESG goals. The cross-functional department was put under lawyer Beth Sasfai, who at the time was vice president of corporate governance. She got the nod because of her experience as liaison to the Corporate Governance and Policy Committee, which oversees sustainability and reputational risk.

Sasfai is now chief ESG officer. The leader of the supply chain function is the chief sustainability officer. They both report to the chief administrative officer, who is also the company’s legal and public policy officer.

Part of Sasfai’s mission when she assumed her new role was to shift from a corporate responsibility report to investor-focused ESG reporting. So she met with the top 15 U.S. and European shareholders to determine the crucial issues for the company, what it should disclose and which frameworks it should follow.

The result: Verizon used the Sustainability Accounting Standards Board’s telecommunications services standard in its inaugural 2019 ESG report and published a standalone report aligned with the recommendations of the Task Force on Climate-Related Financial Disclosures. It was what investors “overwhelmingly” asked for, said Sasfai.

Sasfai collaborates internally, too. “My team is responsible for making sure we are aligned and making integrated decisions; that’s half the battle,” she told us. “Otherwise, you’ve got people working in their silos on issues that should be informed from multiple perspectives and areas of expertise.”

An example of how this principle plays out in practice is Verizon’s goal of achieving net-zero emissions in its operations by 2035. To figure out how to get there, Sasfai put together a working group composed of members from the sustainability, finance and real estate teams.

The group meets quarterly to track progress on its assigned activities. The real estate team manages energy usage across the company and partners with the sustainability team on developing on-site renewable energy at company facilities. These teams work with the finance function to invest in renewable energy. As part of its net-zero goal, the company wants to source or generate 50% of its annual electricity consumption from renewable sources by 2025. To meet that target, Verizon has entered into 14 long-term virtual power purchase agreements that will support new wind and solar power facilities for the U.S. electrical grids. In addition, the company added more than eight megawatts of solar power at eight of its facilities in 2020.

Given the cross-functional nature of sustainability initiatives, Sasfai emphasized that one leader must coordinate strategy. “You absolutely need someone who is responsible for looking across your organization and making sure you know what commitments are being adopted, how they’re being measured and how they’re being reported,” she said. Consistent messaging across the company is crucial, too, she added.

“It’s impossible to sit on the fence,” Korn Ferry’s Lowe told us. “You’re either part of the solution or part of the problem.” Given the rising societal demands and the regulatory risk, you need to decide how you’re going to do this. Major constituencies — and prospective employees — all care about this issue. Failing to act risks alienating one or more of these groups. 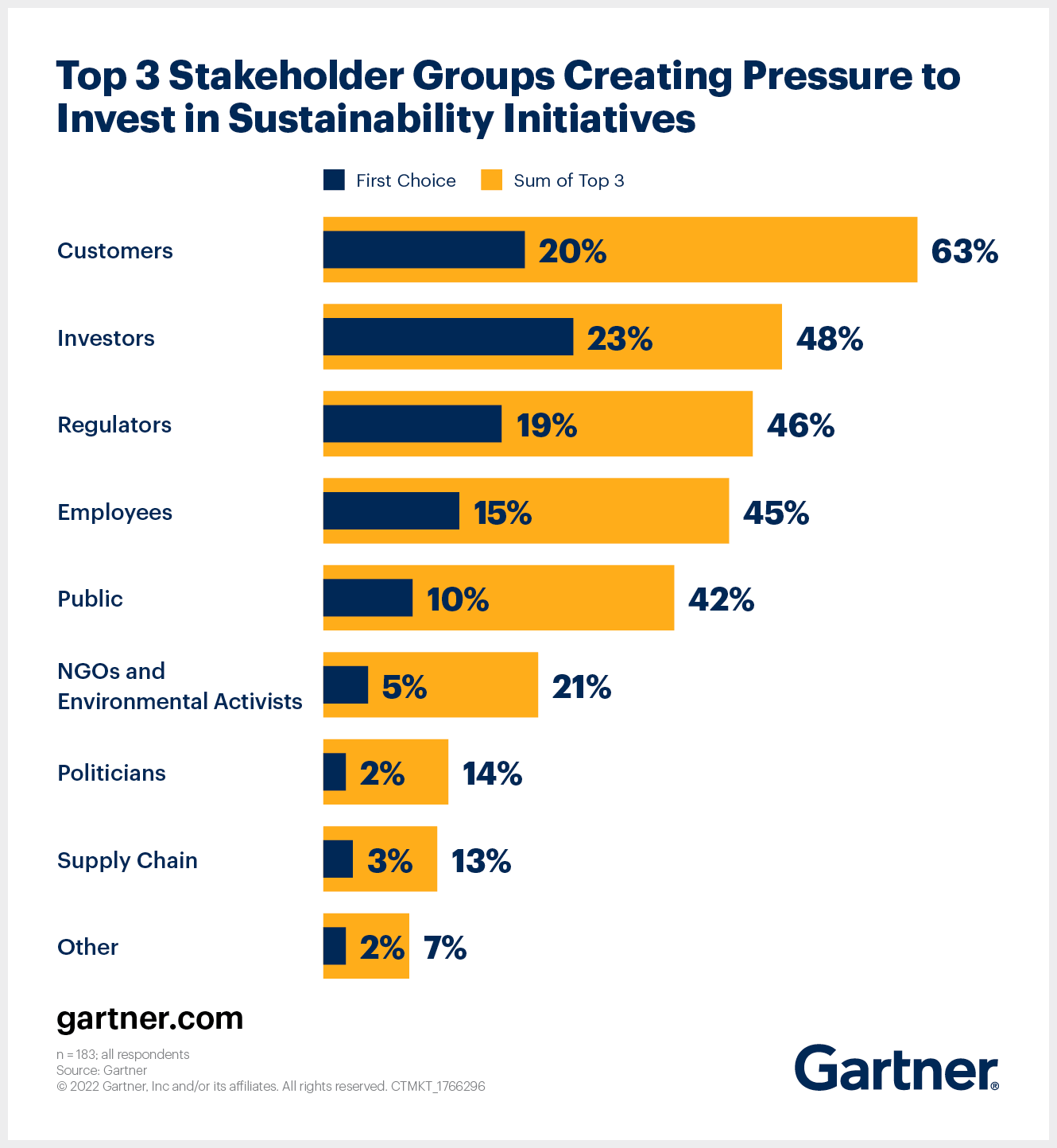 Globally, the volume of conversations on social media using the term “chief sustainability officer” has more than doubled over the past two years. And 73% of CEOs say over the next three years, the pressure to act on the issue will only intensify.

Top countries where the conversation is taking place: the U.S., the U.K., Germany, India, Canada and France. 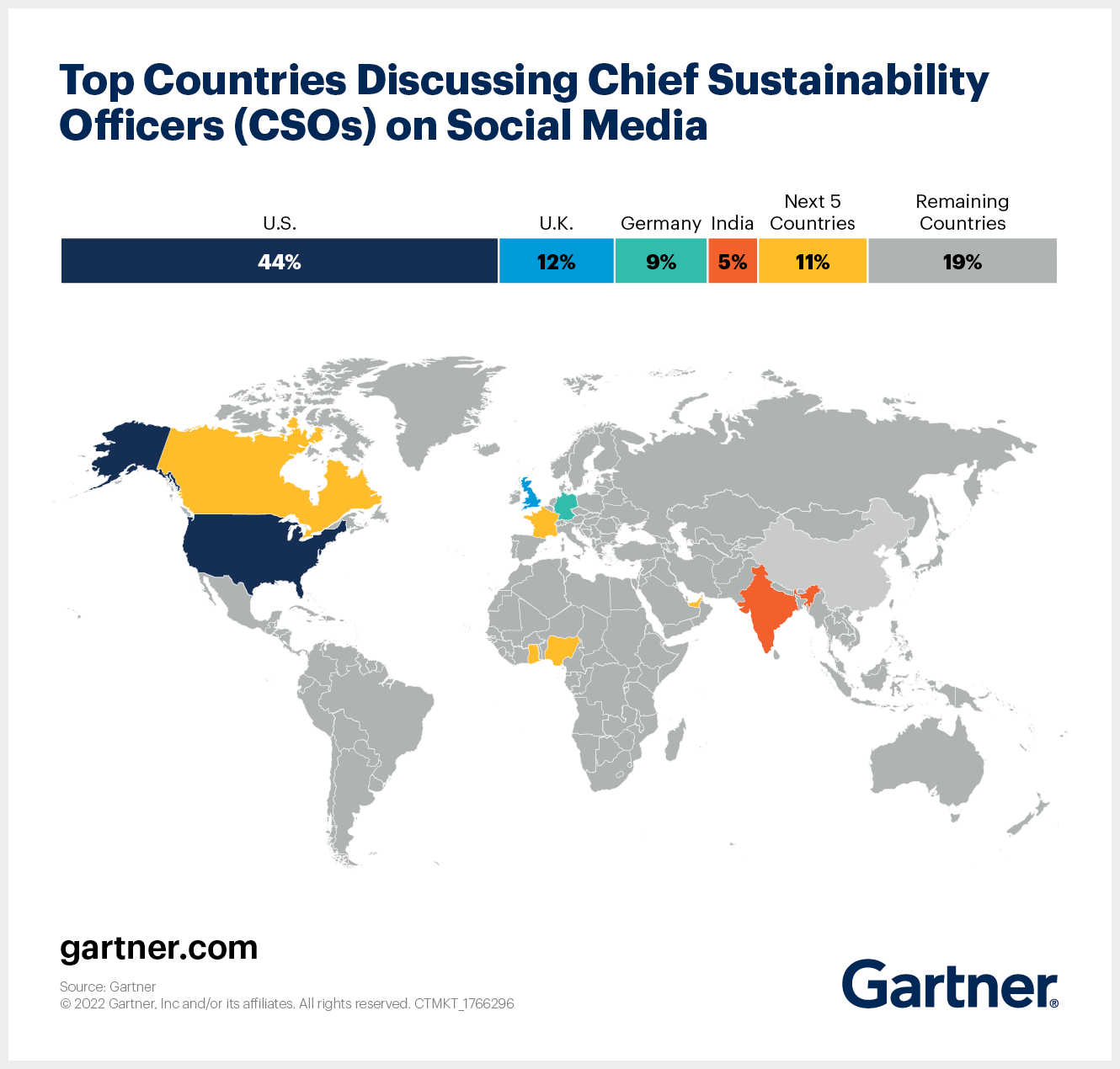 Does Your Organization Need a Chief Sustainability Officer?

Earth to All Executives: Achieve Sustainability Goals With Leadership, Talent and Culture Principles

Reinventing Supply Chain for the Future

Reinventing Supply Chain for the Future