IBM Bets on the Cognitive Era

In the Mastermind Keynote at Gartner Symposium/ITxpo, IBM stakes its claim on a future where cognitive ability will permeate business.

Ginni Rometty, Chairman, President and CEO of IBM, hopes that in the next 20 years, people will have their first experience with IBM products in the form of Watson, its cognitive technology that processes information with reason and advances its own learning. Whether in an education setting that helps students learn in the style that’s best suited for them, or in the form of early childhood toys, such as a dinosaur that matches its personality to how the child acts, thinking systems will permeate businesses and the products and services they produce. 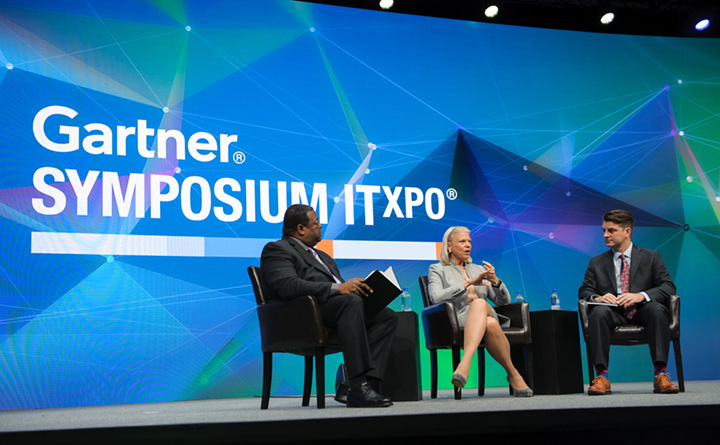 During the Mastermind Keynote at Gartner Symposium/ITxpo, IBM’s CEO Ginni Rometty answers questions from Gartner’s Daryl Plummer and Bryan Britz on the importance of cognitive innovations.

IBM is making its big bet on what Ms. Rometty called the “cognitive era”, and the company announced today the formation of the Cognitive Business Solutions group to build cognitive innovations across industries. In a mastermind keynote interview with Gartner analysts Daryl Plummer and Bryan Britz, at Gartner Symposium/ITxpo in Orlando, Ms. Rometty said that IBM will stake its claim with Watson. “This is our moonshot,” she said. “You stake the claim, and you move fast.”

Watson’s potential lies in its ability to understand, reason and learn. Companies will use this cognitive ability to build real value when they can predict outcomes and take actions to change them. For example, work in Beijing, China aims to predict the weather with a degree of confidence that could prompt the closing of factories to impact air quality and lessen pollution.

For its part, IBM uses Watson to supplement its early levels of product support and to match employee skills with the best jobs.

Ms. Rometty told the audience of 8,500 CIOs and senior IT executives that Watson is not a supercomputer, but rather a set of 28 systems underpinned by more than 50 technologies. IBM hopes organizations will pick and choose how they want to start adding cognitive ability to their operations or services. “The era of the ability to think will permeate business,” Ms. Rometty said. Put another way, she offered: Digital business + digital intelligence = the cognitive era.

From one era to the next

Over the past few years, IBM has continued to develop products and services and make acquisitions to address the big trends of data, cloud and mobility. “Our job is to take the company from one era to the next and bring more value, so you can compete in the future,” said Ms. Rometty.

“Our job is to take the company from one era to the next and bring more value so you can compete in the future.”

She acknowledged that it’s not easy for IBM’s clients, let alone the company itself, to move quickly. “We share this journey together,” Ms. Rometty said, and she emphasized the need to create bimodal operations while modernizing legacy assets to unlock their value. It is the combination of older assets with new assets, such as cognitive ability, that will differentiate businesses and make them more competitive.

Part of Watson’s power, she noted, is to “see” into 80 percent of the world’s “dark data” that previously has been unrecognized, and therefore, of no value to organizations. “We’ve given Watson eyes,” she said, so that the system can interpret pictures and other unstructured data. IBM’s work in healthcare to support doctors with diagnoses and treatment plans relies on Watson’s ability to access vast amounts of data including for example, the ability to interpret a legion on the face.

The impact of Watson on jobs

Ms. Rometty commented on the growth of data analytics as a critical business function with a necessary rise of new jobs and skills to meet the demand. As for Watson, she sees its role to augment jobs that people do, rather than replace them. For example, banks in Mexico and Singapore use Watson to extend wealth management knowledge across employees, thus adding new services to demographics who previously couldn’t afford it. When challenged by Mr. Plummer that he might worry about his own job, she admitted that while some jobs may be replaced as they are, “in every advance of technology and science,” the real goal is for people to become smarter and better at their jobs by supplementing their knowledge and skills with Watson’s output.

A video replay from this Gartner Symposium/ITxpo Mastermind Interview is available on Gartner Events on Demand.

IT Org Design Roadmap: How to Shift from Project to Product

IT Org Design Roadmap: How to Shift from Project to Product

Invest in Your Digital Innovation Ecosystem to Drive Sustainable Growth