17 Network Security Concepts and Acronyms You Need to Know

Download now: How to Mature Your Information Security Program

“Network security can be complex, yet it is foundational to all other information security systems,” says Thomas Lintemuth, Senior Director Analyst, Gartner. “The good news is that network security is a mature market with strong, established providers, along with innovative startups that are constantly bringing new and better technology to keep the network safe and the assets protected.”

Here, we provide a primer on the key concepts to understand for a modern network security architecture. Beginning with the roles and responsibilities of network security leaders followed by a logical architecture, mapping the range of security requirements offers a strong foundation on which to build. 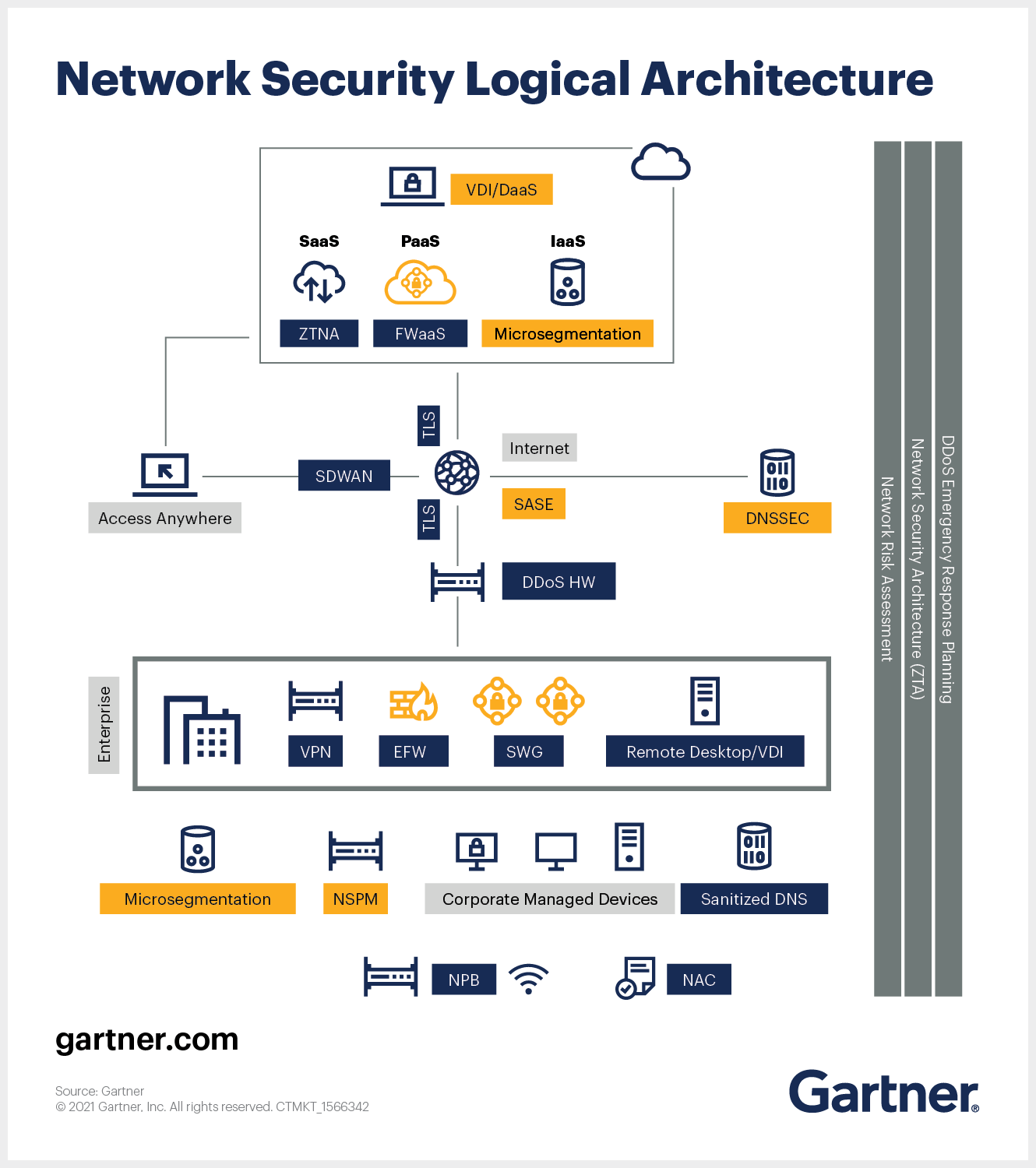 Network risk assessment is the full inventory of the ways in which nefarious or careless actors, internal and external, could use the network to attack connected resources. A full assessment allows the organization to define risks and mitigate them with security controls. These risks could include:

Crafting useful assessments requires collaboration between IT and business stakeholders to understand the span of risks. The process of working together and creating a process for understanding the broad risk picture is as important as the end set of risk requirements.

Zero-Trust Architecture (ZTA) is a network security paradigm that operates from the assumption that some actors on the network are hostile, and there are too many entry points to fully protect. An effective security stance therefore protects the assets on the network rather than the network itself. As it relates to users, a proxy decides whether to grant each access request based on a risk profile calculated from combined contextual factors such as the application, location, user, device, time of day, data sensitivity and so forth. As the name indicates, ZTA is an architecture, not a product. You can’t buy it; however, you can develop it from some of the technical elements included in this list.

Network firewall is a mature and well-known security product with a range of functionality aimed at preventing anyone from directly accessing the network servers that host an organization’s applications and data. Network firewalls offer flexibility and are used for on-premise networks as well as cloud. For the cloud, there are cloud-focused products, as well as methods that IaaS providers deploy to fulfill some of the same functions.

Secure web gateway has evolved from its past purpose of optimizing internet bandwidth toward protecting users from malicious content from the internet. Functions such as URL filtering, anti-malware, decrypting and inspecting websites accessed via HTTPS, data loss prevention (DLP) and a limited form of cloud access security broker (CASB) are now standard.

Intrusion Prevention System (IPS) protects against vulnerabilities that cannot be patched (e.g. on packaged applications that the service provider no longer supports) by placing an IPS appliance in-line with the unpatched server to detect and block an attack. IPS functionality is often included in other security products, but stand-alone products also exist. IPS is experiencing a resurgence because cloud-native controls have been slow to include it.

Network access control provides visibility over everything on the network and policy-based control over access to the network infrastructure. Policies may define access based on the user’s role, authentication or other factors.

Network packet broker appliances process network traffic so that other monitoring appliances, such as those dedicated to network performance monitoring and security-related monitoring, can operate more efficiently. Features include packet data filtering to identify the risk level, distributing packet loads and hardware-based time stamp insertions, among others.

Sanitized Domain Name System (DNS) is a vendor-provided service that operates as the domain name system for an organization, preventing end users (including remote workers) from accessing sites that have a poor reputation.

DDoS mitigation limits the disruptive impact of distributed denial of service (DDoS) attacks on the network’s operations. The products take a multi-layered approach to protect the network resources inside of the firewall, the resources that are on-premise but in front of the network firewall, and resources external to the organization, such as those from internet service providers or content delivery networks.

Network Security Policy Management (NSPM) involves analytics and auditing to optimize the rules that guide network security, as well as change management workflow, rule-testing and compliance assessment and visualization. NSPM tools may use a visual network map that shows all the devices and firewall access rules overlaid onto multiple network paths.

Microsegmentation is the technology that inhibits an attacker already on the network from moving laterally within it to access critical assets. Microsegmentation tools for network security come in three categories:

Secure Access Service Edge (SASE) is an emerging framework that combines comprehensive network security functions, such as SWG, SD-WAN and ZTNA, to name three, with comprehensive WAN capabilities to support the secure access needs of organizations. More a concept than a framework, the goal of SASE is to deliver a unified security service model for providing functionality across a network in a way that is scalable, flexible and low-latency.

Network detection and response continuously analyzes inbound and outbound traffic and flow records to document normal network behavior, so it can identify and alert the organization about anomalies. The tools use a combination of machine learning (ML), heuristics, analytics and rule-based detection.

DNS security extensions is an add-on to the DNS protocol that aims to authenticate DNS responses. The security benefits of DNSSEC require digitally signing validated DNS data, which is a processor-intensive process.

Firewall as a Service (FWaaS) is a newer technology closely related to cloud-based SWG. The difference is in the architecture: FWaaS operates over VPN connections between endpoints and network edge devices, and the security stack in the cloud. It can also connect end users to on-premises services through VPN tunnels. FWaaS is far less common than SWG.

Upskilling in Crisis - Elevate Your Skills With Continuous Learning