What CFOs Are Saying About Bitcoin

This note provides a foundational perspective on why CFOs should care about bitcoin. We focus on nontechnical concepts, finance executive expectations and current concerns regarding bitcoin, rather than explaining the technical details of bitcoin and broader blockchain technology.

CFOs who are trying to make sense of recent high-profile corporate acquisitions of bitcoin should:

Bitcoin is a cryptocurrency, based on a 2008 white paper by the pseudonymous Satoshi Nakomoto. Bitcoin is a peer-to-peer version of electronic cash that allows online payments to be sent in real time from party to counterparty without a financial institution as intermediary and without a central bank as a clearing house. The system of bitcoin payments leverages a cryptographic algorithm known as ‘proof of work’, and distributed ledger technology. Together, they enable “any two willing parties to transact directly with each other without the need for a trusted third party.”The design also precludes double spending by supporting unique transactions. Bitcoin is “mined,” traded, distributed and stored on an immutable distributed ledger. Bitcoin is the first application to use a blockchain. Transactions are recorded in a public history.

Bitcoin shares attributes with various traditional financial instruments. Bitcoin behaves like commodity money: Its scarcity is guaranteed by the fact that only 21 million bitcoins can ever exist. Once bitcoin miners have unlocked all the bitcoins, the planet’s supply will be exhausted. As of 24 February 2021, 18.638 million bitcoin have been mined, which leaves 2.362 million yet to be introduced into circulation. Bitcoin has been likened to digital gold and is the first mainstream digital asset.

Bitcoin also behaves like fiat money and acts as a medium of exchange; businesses or individuals can use it to buy goods and services although its price is too volatile to make it a practical medium of exchange, especially for small purchases. But unlike fiat currency, usually you cannot pay taxes to a sovereign government directly with bitcoin. Also, where money supply depends on central bank decisions, bitcoin’s supply is capped. Bitcoin also behaves like a financial asset; it can be bought and sold on exchanges. Given bitcoin’s relatively short performance history, it’s likely still too early to understand its fundamental patterns and correlation with other asset classes with confidence.

Many cryptocurrencies exist, but by market capitalization, bitcoin is the world’s largest cryptocurrency (over $950 billion at time of writing). This is over four times the market capitalization of the next largest cryptocurrency, Ethereum ($220 billion at time of writing). Most traditional financial services that exist for cash (including savings accounts, borrowing, lending and asset management) now also exist for this digital currency.Similar to fiat currency, bitcoin has no intrinsic value. Fiat currency value fundamentally depends on the supply and demand for the currency. Bitcoin has value for several reasons:

On 8 February 2021 Tesla announced it had purchased $1.5 billion worth of bitcoin. In its Securities and Exchange Commission filing, Tesla noted it purchased bitcoin for “more flexibility to further diversify and maximize returns on our cash.” Tesla treats its cryptocurrency holdings as intangible assets, meaning it must be regularly tested for impairment by management.

Despite much coverage in the financial media over Tesla’s decision to hold bitcoin on its balance sheet, only a small number of public firms (mostly Canadian and U.S.) hold bitcoin. A few public firms who have chosen to hold bitcoin on their balance sheet believe it may be a better store of value than fiat currency, such as the U.S. dollar (USD), in the long term. This belief is mostly driven by accommodative monetary policy by the Federal Reserve Bank during the pandemic and expectations of low interest rates for the future. These firms believe bitcoin may act ultimately as a hedge against inflation. The near-term driver for these organizations to hold bitcoin was a speculative capital allocation decision. They are not holding bitcoin to reap operational efficiencies or improve margins from adjusted business processes.

Bitcoin and blockchain technology are often incorrectly conflated as the same thing. A blockchain is an expanding list of cryptographically signed, irrevocable transactional records shared by all participants in a network. Each record contains a time stamp and reference links to previous transactions. With this information, anyone with access rights can trace back a transactional event at any point in its history, belonging to any participant. A blockchain is one architectural design of the broader concept of distributed ledgers. Both private and public blockchain networks exist.

Blockchain is used to manage all bitcoin transactions that have ever been executed securely and without the help of a third party. Bitcoin uses blockchain technology, but it’s only one use case for blockchain. Blockchain can also transfer digital assets, proprietary information and rights among other use cases. With blockchain, traditional intermediaries or middlemen become less necessary as transactional friction is reduced.

Holding bitcoin is not necessary to achieve these benefits and has nothing to do with them at this point. Lower operational costs are derived from more efficient processes, such as elimination of waste in supply chains or reduced headcount associated with the audits or reconciling information in siloed systems across business partners. For a basic framework to understand whether a distributed ledger technology, including blockchain, is suitable for your organization, see and . 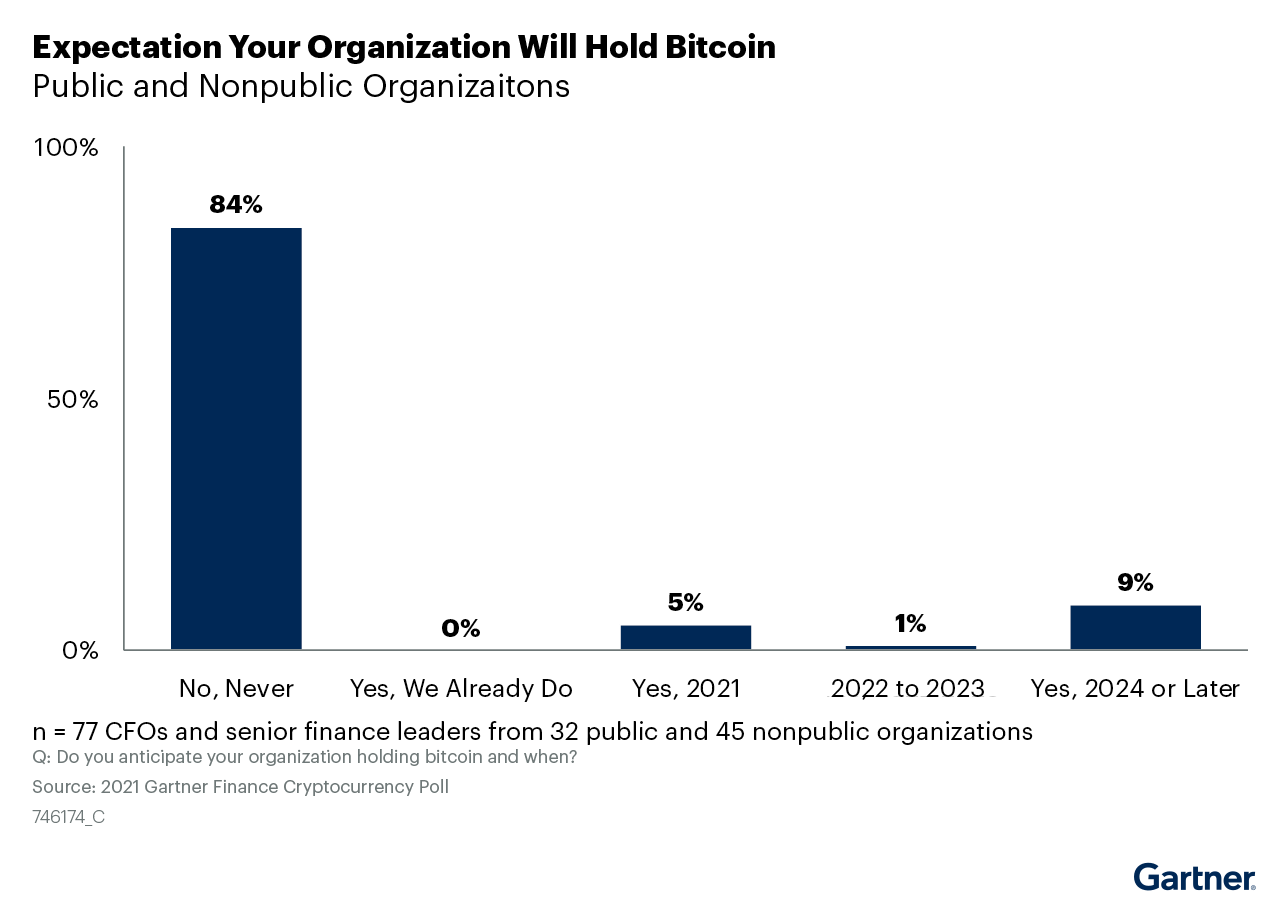 CFOs may use the following justifications for holding bitcoin on the balance sheet:

Large firms who are holding bitcoin on their balance sheet accept the cryptocurrency’s price volatility. They tend to have an abundance of cash on their balance sheets. In Tesla’s case, the purchase used cash not allocated for running its operations. Some public firms may be acquiring bitcoin to boost the supposed idiosyncratic diversification benefits of purchasing their stock. Large enterprises (more than $1 billion annual revenue) and small enterprises (less than $1 billion annual revenue) indicated almost identical rates of holding bitcoin in the future.

Pivoting to nonpublic organizations, private company CFOs were more unanimous in anticipating that their organization would never hold any bitcoin, with only 7% saying they would hold bitcoin in the future. Some evidence indicates publicly traded firms are better positioned to take advantage of growth opportunities than unlisted firms and do so by adjusting their capital allocation. Put simply, there may be greater risk aversion in capital allocation from private CFOs compared to public CFOs.

Bitcoin has several associated risks: regulatory, insurance, fraud and market risk. For finance executives, the dominant concern for holding bitcoin is the financial risk due to its volatility (84% of respondents). Financial risk due to bitcoin volatility is cited as a concern twice as often as anything else. Other concerns include board risk aversion (39%), slow adoption of bitcoin as an accepted form of payment or exchange (38%), regulatory concerns (32%) or not having skills/knowledge to hold bitcoin(30%) (see Figure 2).

We also asked CFOs and finance executives to select the top questions they have about bitcoin (see Figure 3). 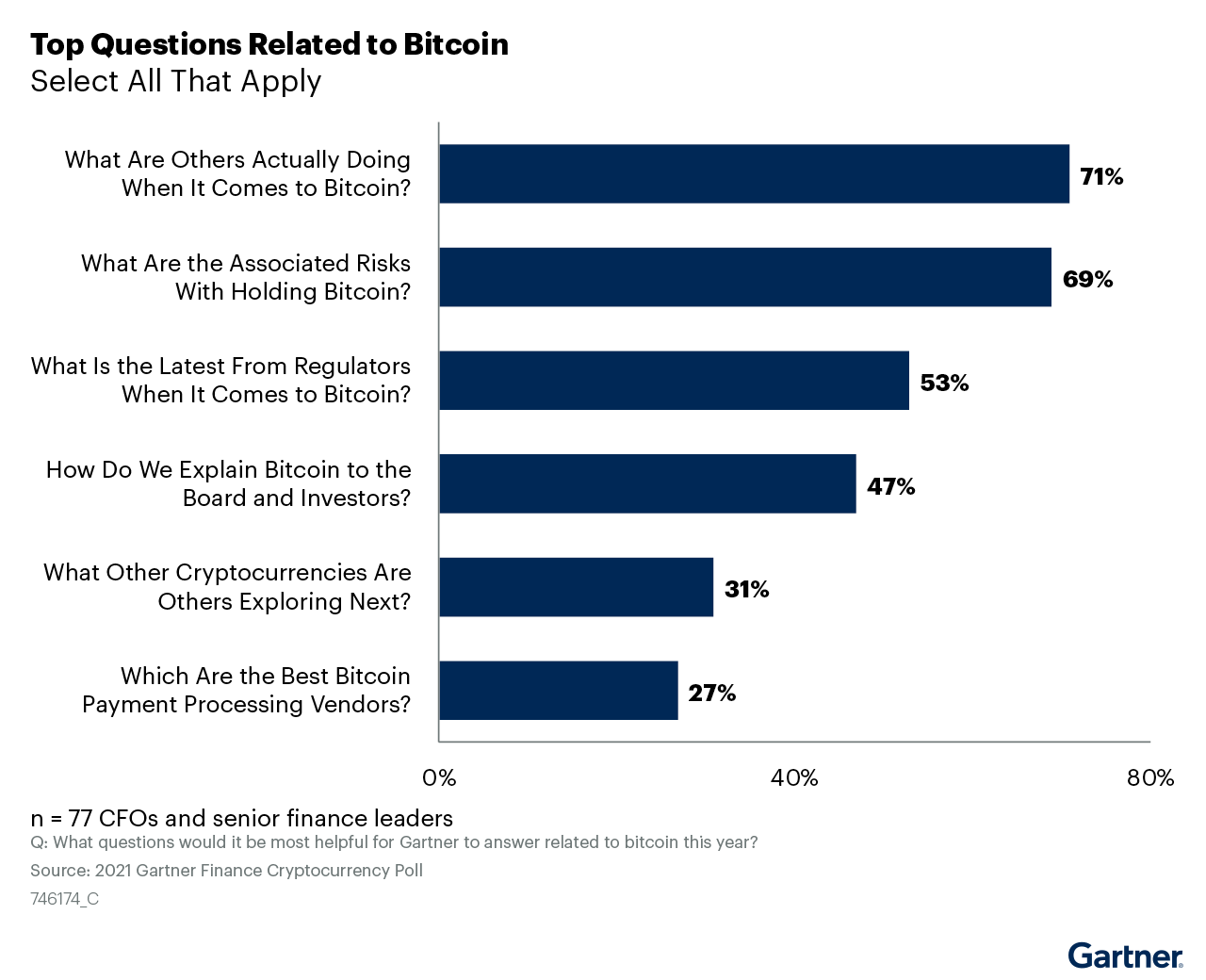 Bitcoin is here to stay. It has the first-mover advantage and represents the largest cryptocurrency market capitalization in the world. However, bitcoin’s use and usefulness on the balance sheet is still an open question, especially for nonpublic organizations.

Smaller and private firms would be more productive investigating incremental business use cases unlocked by blockchain for their organization rather than focus on bitcoin. Firms not in technology or financial services have been reluctant to hold bitcoin. Tighter working capital and illiquid balance sheets represent real barriers toward using available cash to speculatively purchase bitcoin.

The 2021 Gartner Cryptocurrency Poll was conducted online from 11 February 2021 through 12 February 2021 with 77 CFOs and senior finance leaders. The survey was developed collaboratively by a team of Gartner analysts and was reviewed, tested and administered by Gartner’s research data analytics team.

Blockchain — The Next Big Digital Disruptor for CFOs, EXL.

Capital Allocation by Public and Private Firms, University of Washington.

How Your CFO-CIO Partnership Drives Digital Funding — Or Not

A CFO’s Quick Guide to Cryptocurrency

The Cost Implications of Remote Work: 9 Insights for CFOs

How Your CFO-CIO Partnership Drives Digital Funding — Or Not

Join the most important gathering for CFOs to explore potential finance tech providers and get actionable insights for how you can prioritize technology investments.