How to Create a Powerful Organizational Change Management Storyline

CIOs can use this simple framework to get employees on board with enterprisewide change.

Home remodeling television shows have become increasingly popular. Viewers get a thrill out of seeing the before and after, and the many steps in between. But what makes the shows so compelling is the story behind the transformation. It’s the key to keeping viewers invested in the outcome.

“ Individuals learn and respond better to coherent explanations for change”

CIOs can use this same tactic when undertaking an enterprisewide change. The more that employees understand the why, the more motivated they will be to create their own before and after story.

“Individuals learn and respond better to coherent explanations for change, and do so most readily if presented as part of a storyline,” explains Elise Olding, research vice president at Gartner.

CIOs can compose their organization’s storyline using the four components of the From/To/Because model, a framework for creating an effective behavior change journey.

From: Define your starting point

The From/To/Because model lays out behavioral shifts on a spectrum that “bookends” the change to be made. Start by defining your organization’s current behaviors — with input from management, business partners and IT employees. This constitutes the “From” part of the framework, an essential step to helping employees understand not just the future state, but also the starting point.

“ Change happens one step at a time, and the first step is the most critical”

“It is often easier to paint a picture of the future, but it takes time and effort to assess where you are now. Without the first steps, it is impossible to make a journey,” says Olding.

Create a list of current behaviors and be prepared to give examples of why they are depicted as such. Ideally, your “From” list will provide a current and accurate view of how work gets done across the organization — and include current behaviors that should remain intact.

To: Identify the desired change

Describe the desired set of behaviors that you want employees to adopt. This is the “To” part of the journey, which should clearly outline the direction in which the organization needs to go. While it’s important that employees understand what the future is, allow for flexibility on what the end state might look like.

Once you have compiled your “To” list, place it alongside your From list (see Figure 1). This is a key component of your change storyline. Be sure to add the current behaviors that you want to keep in the To column, and provide specific examples of them. Because you are creating a “next normal” for the organization, not all new behaviors will have a have a correlating From behavior. 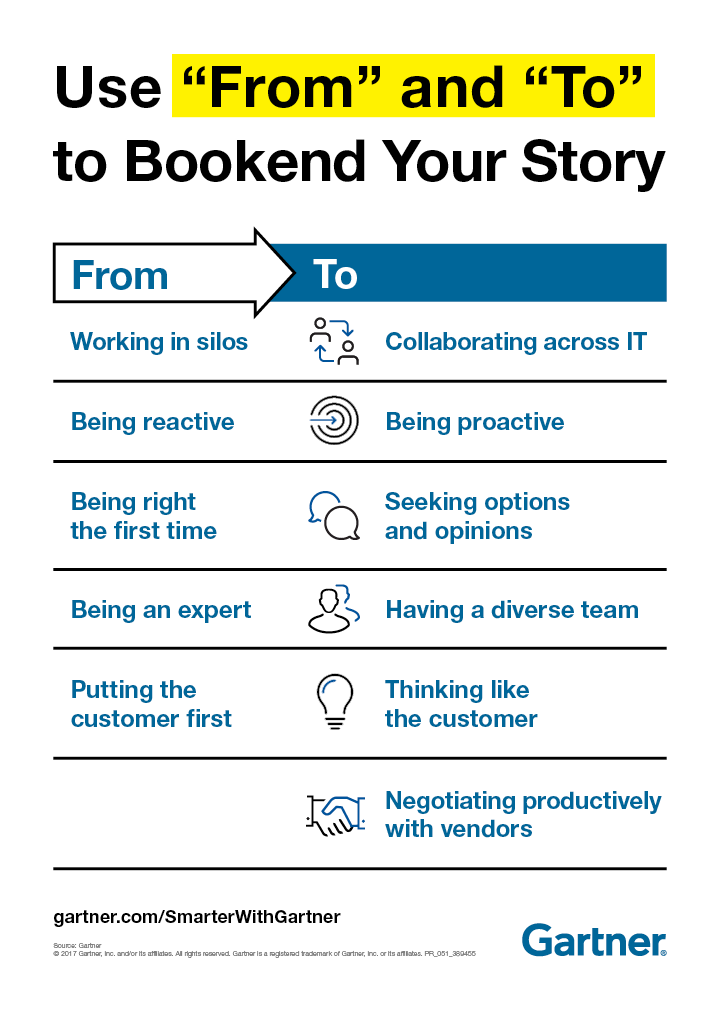 Because: Specify the why

As with a home remodeling show, it’s the story behind the change that will engage employees. You’re asking them to go on a change journey. They need to know why.

Now that you’ve defined the From and To, it’s time explain the “Because.” It is a vital component of the From/To/Because framework as it:

“Because” is frequently overlooked and not consistently communicated by leaders. So be sure to add the Because statement as a third column to your From/To story to provide a clear picture of the path to be taken. When employees have the full view, they know what is expected and have the information they need to decide how they can prepare to go on the change journey.

“Change happens one step at a time, and the first step is the most critical,” says Olding.

Before you begin your change journey, help employees identify the initial steps to start the transition.

These initial steps make the change feel more possible, foster motivation and create the momentum needed to take the next steps. Knowing what they can do now to prepare for tomorrow also builds employee confidence and alleviates fears and concerns.

“Too often, change sounds like a demolition rather than just a remodel,” says Olding. “The From/To/Because model, followed by individualized first steps, ensures your employees know the direction of the organization and are able to plan their participation on the journey.”

Build a Digital Future: The Metaverse

The 3 Secrets to Future-proof Your IT Organization