How to Deal With Digital Disruption

Six ways CIOs can (and should) deal intentionally with digital disruption.

Digital business. Future of the enterprise. Future of work. Future workforce. Digital society. CIOs have to deal with these forces and futures — and more. The only constant is change.

Businesses are being disrupted and redisrupted constantly. But controlling the disruption isn’t the solution. CIOs need to focus on reacting to inevitable disruption in intentional ways.

“ We can’t be reactive. We have to be more thoughtful by saying ‘it’s coming, so I’m going to make the most out of it'”

“You can’t change the forces, but you have to change how you respond and who owns the responses,” said Helen Huntley, Gartner Managing Vice President, at Gartner IT Symposium/Xpo™ 2019 in Barcelona, Spain. “We can’t be reactive. We have to be more thoughtful by saying ‘it’s coming, so I’m going to make the most out of it and I’m going to make a decision about it.’”

The solution is not to do nothing or to delay decisions. The only guarantee is that there will be more uncertainty in the future. Organizations need a plan for when, not if, disruption comes.

Huntley introduced the Gartner A6 model, which outlines six ways CIOs can respond to disruption. Don’t overcommit to one of the six, and keep in mind there is no one right approach to the mix and balance of each type. 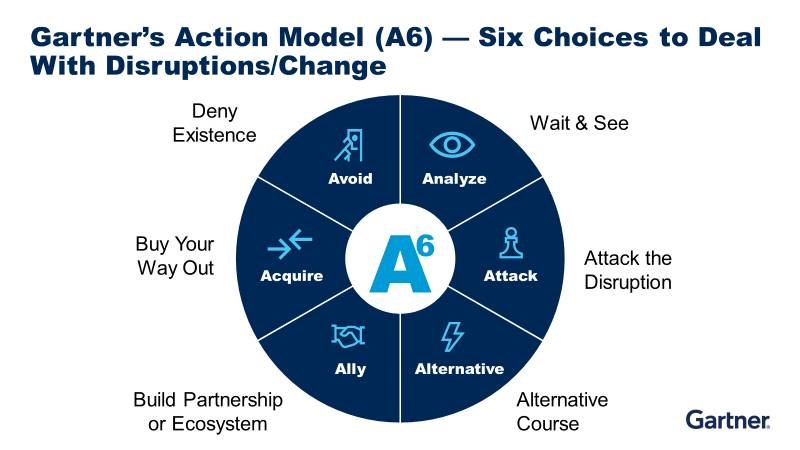 Wait and see how the competition deals with the disruption. This approach feels passive, but organizations can gain valuable insight by watching other players. However, waiting too long can have negative consequences, including missed market opportunities and revenue loss. For example, traditional banks didn’t think PayPal’s online payments business model was viable and so they waited to respond. PayPal now has 300 million active users and banks lost significant market share.

Identify and deal with threats via swift and aggressive action. This approach can include attacking a particular market segment. For example, automaker GM went after Ford’s low-priced car segment — dominated by the Model T — in 1921. Attack also includes taking legal action. For example, Honeywell filed a patent infringement lawsuit against smart home product company Nest for what it felt was a violation of Honeywell’s intellectual property.

Watch what competitors are doing and then identify an alternative market opportunity. This might include looking to entirely new or adjacent markets. For example, when Nintendo was losing out to the superior graphics of Sony and Xbox, it pivoted to an entirely new idea — bringing the whole family to the console with the Wii.

Partner with another company or build an ecosystem. This might include an external vendor that brings a new capability to the organization or helps to win more market share. For example, to counter Airbnb’s disruption, Marriott International partnered with Starwood Hotels & Resorts Worldwide to create a larger global presence and shared resources.

Buy a company that does what you need to counter disruption. Instead of trying to build internally or find an ally, one option is to just buy a company that already has the capability. For example, Facebook acquired Instagram, which enabled it to enter a new image-focused platform market, and purchased WhatsApp to gain an international messaging market.

Take no action and ignore disruption. This is not a recommended course of action, but it requires little to no effort. It does, however, put the organization at risk of failure because it means a failure to innovate. For example, Blockbuster did not adapt to a streaming-based model and continued to rely on revenue from late fees. Similarly, BlackBerry did not react in time (or at all) to competitors Apple and Google until it was too late.

Join with the world's leading IT and business executives to get an update on accelerating growth in a new era of transformation and technology trends.

Six Steps for Dealing With Digital Disruption: Intentionally Versus Accidentally

Tech Growth and Innovation Preview: Customer Centricity is the Key to Growth

IT Spending Forecast, 1Q22 Update: The Russian Invasion of Ukraine

The Gartner Top Trends for Tech Providers in 2022