How to Navigate Pushback to Diversity, Equity and Inclusion Efforts

Understand the most common forms of pushback so you can learn how to address it proactively.

In the face of the COVID-19 pandemic and a worldwide reckoning about racial injustice, many organizations have taken action to engage with social issues that were previously avoided at work. These include conversations about racial and ethnic injustices, the socioeconomic disparities exposed by the pandemic, and other polarizing themes, many of which overlap with diversity, equity and inclusion (DEI).

Pushback to DEI efforts can stem from two types of perceived threat:

Learn more: What Is HR Strategy — And How Can You Best Execute It?

Pushback stems from employees’ desire to manage these threats. Employees may not necessarily be fully aware of the threats they feel or what aspects of DEI are triggering these threats. Organizations should learn about how these threats manifest in the workplace and leverage this information to identify and address pushback.

This framework addresses pushback that seeks to disrupt, invalidate or disconnect from ongoing initiatives designed to advance equity and inclusion for marginalized groups in the workplace. 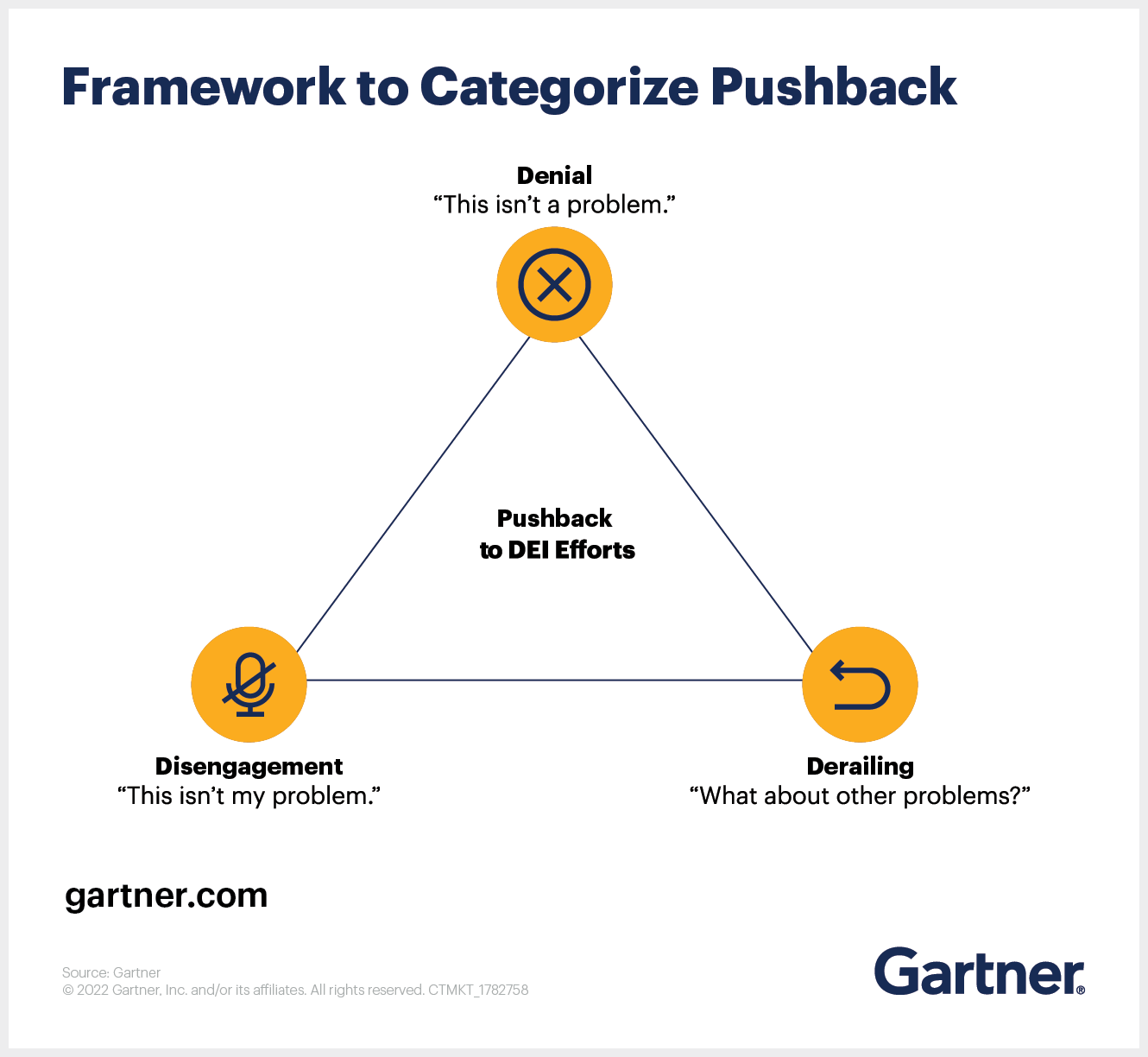 Denial is when employees don’t acknowledge the existence of structures like race, class or caste and ignore the resulting discrimination or bias. Employees who react with a denial response do not acknowledge the different, often negative, experiences of marginalized employees in the workplace. Deniers also fail to recognize the underlying reasons why marginalized groups are underrepresented in the workplace and push back on initiatives that aim to address the root causes of underrepresentation.

Signs of denial might include employees making comments such as:

Disengagement is an unwillingness to take action in support of DEI. People who disengage are usually aware of structural inequalities but struggle with playing the role of an ally or active contributor to DEI. Sometimes there is an underlying, legitimate fear of saying or doing something that further harms someone from a marginalized group. But sometimes disengagement with DEI initiatives can occur when a person is unwilling to take action or displays a general unwillingness to engage with DEI by skipping DEI events, steering away from DEI training or being a bystander to exclusionary behavior.

Learn more: What Is HR Transformation — and What Does It Achieve?

Derailing attempts to draw attention away from marginalized groups by focusing on experiences of members of a dominant group. Derailers can be dismissive of concerns flagged by marginalized groups that DEI works to address. For example, when an employee objects to the statement “Black lives matter” by saying “all lives matter,” this derails the conversation about why showing solidarity with Black lives, specifically, is important. Derailing insists on protecting the feelings of the dominant group (in this instance white employees) over displaying support for Black employees. This threatens to further marginalize the groups DEI intends to support.

Pushback can be tricky to navigate, because HR leaders and organizations are already dealing with an emotionally charged situation. Once organizations identify and understand the nature of pushback, they should move their focus to managing and mitigating it. Organizations must be cautious about continuing to center the experiences of marginalized groups when addressing pushback.

Listen now: The State of DEI

Don’t assume all employees will buy into a DEI initiative. Tailor communication to create transparency about why a specific program is being rolled out and the preceding events that make the case for it. For instance, if a program was created as a response to the Black Lives Matter protests, HR leaders can combat pushback by communicating the context for the program, the role all employees play in advancing it and the outcomes it is intended to achieve.

Be sure to communicate to employees who are not already bought in, without invalidating their feelings. To head off attempts at denial or derailment, consider the different perspectives employees may have, anticipate the threats they may perceive as a result of your initiatives and address these proactively in your communication strategy.

A lack of empathy for marginalized groups often enhances the threat perceptions that drive pushback. Learning activities to build empathy and awareness of other groups’ experiences can help diminish the sense of threat. HR leaders should acknowledge employees’ gaps in exposure and readiness levels before assigning training and consider creating safe learning spaces for groups known to push back on DEI. Employees may not have the skills to engage with DEI sensitively.

Creating a safe training/learning space for a dominant racial group that is moderated by experts ensures they can openly ask questions that might cause discomfort or harm to marginalized people; for example, “Why is wanting to touch someone’s hair considered a microaggression?” These safe spaces allow employees to make mistakes and ask uncomfortable questions without feeling threatened and without putting the burden of educating them on marginalized employees.

Pushback arguments can also be traced back to a lack of clarity on employees’ role in DEI. HR leaders can involve employees by holding individuals accountable for DEI engagement. One way to do this is to encourage employees, especially those from dominant groups, to engage in ERG membership and to leverage their skills, networks and interests to ideate and contribute to sponsorship programs.

HR Budget and Efficiency Benchmarks for 2022