How to Dispel the Top 5 Myths of Modern Infrastructure

Even with better infrastructure options, CIOs are burdened with greater uncertainty, more risk and hyperbolic claims.

Modern infrastructure is agile, flexible and scalable. It is at the forefront of every chief information officer’s (CIOs) digital strategy — and it's everywhere. But with the multitude of choices comes complexity.

This period of disruption and transformation in the global infrastructure market has opened doors to misleading vendor marketing, leaving CIOs and IT leaders susceptible to false expectations of what modern infrastructure can offer. “There are a lot of misconceptions out there and a lot of hype, usually driven or encouraged by people who are trying to sell you something,” said Senior Director Analyst Paul Delory during a presentation at the Gartner IT Symposium/Xpo™ 2021 conference.

Download now: 10 Tips to Avoid the Most Common Mistakes in Cloud Strategies

Misunderstanding these propositions can cost businesses money, so the first step in this disruptive environment is to dispel some common myths around modern infrastructure. 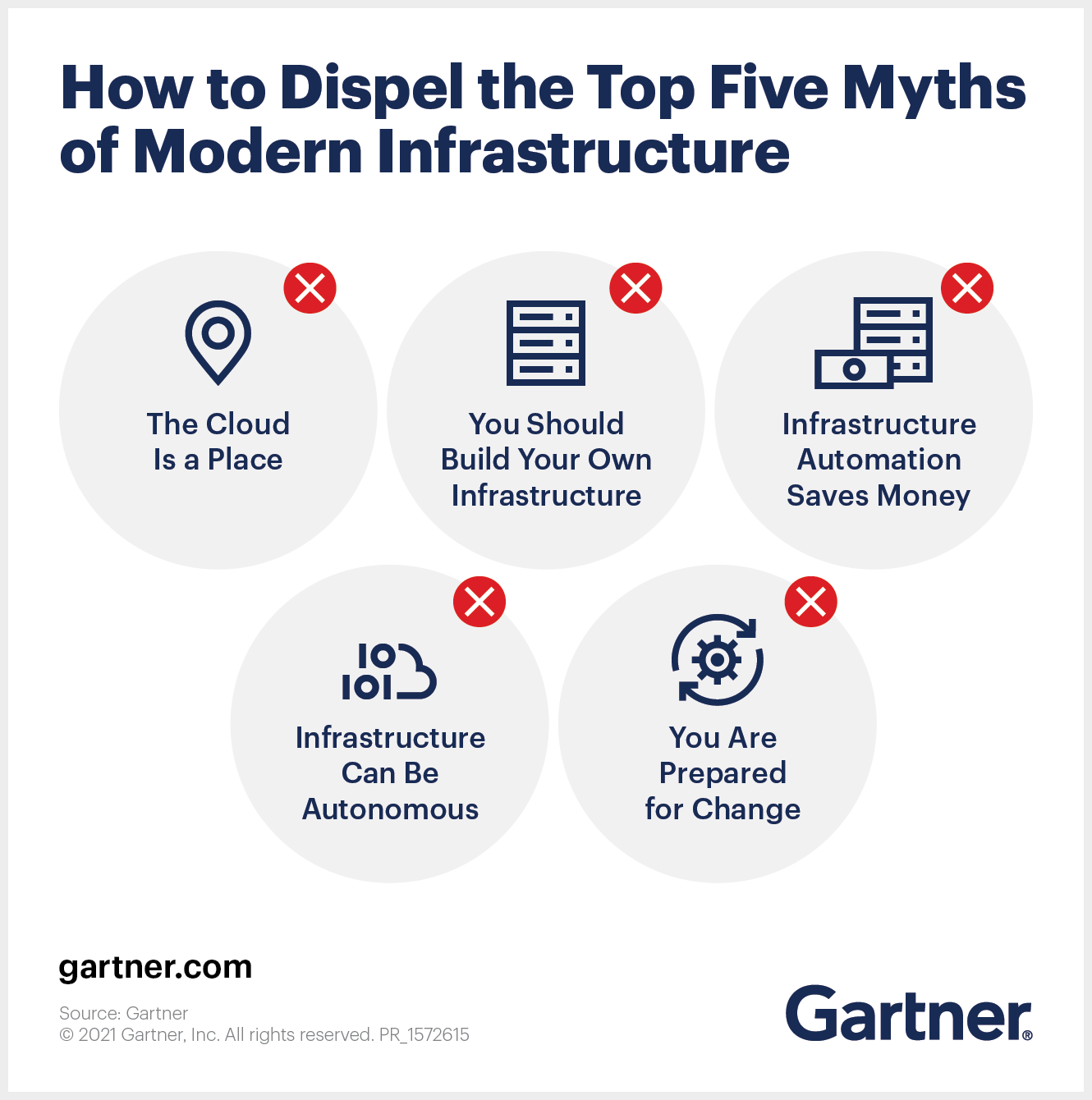 Cloud is a style of computing where scalable and elastic IT-related capabilities use internet technologies to provide as a service to customers. Don’t think of the cloud as a location, but rather as a new computing paradigm where loosely coupled services come together to form applications. It is fundamentally different from traditional IT infrastructure.

There are many reasons that applications or data cannot be moved to public cloud infrastructure, including regulatory compliance, latency, the need for offline access and more. But many organizations still want the cloud model, just in their data centers or at the edge. The question becomes whether you want to buy turnkey services from a provider or build your own.

Now that cloud-first is the expected approach, CIOs should ask:

Myth No. 4: You Should Build Your Own Infrastructure

Historically, IT organizations built their own infrastructure: They bought servers, storage and network switches — often from three different vendors — and assembled everything themselves. But today that is usually unnecessary. You can simply buy a turnkey, ready-made infrastructure stack with little or no assembly required.

One way to do this is to move to the public cloud — but it's not the only way. Integrated systems — including converged, hyperconverged, dedicated and composable infrastructure — bring the benefits of prebuilt infrastructure to the data center and edge.

Then there is “distributed cloud,” where hyperscale public cloud providers place a substation of their infrastructure at your site in order to make their native services available to applications and data running in your data center. Thus, it is now possible to acquire on-premises infrastructure as a service (IaaS) and platform as a service (PaaS) directly from your public cloud provider.

Compare the cost-value benefit you will get from building the infrastructure versus buying it from a vendor. Will the new system integrate with your existing IT environment, or will it increase costs more than it will create value?

Automation is at the core of changes happening in infrastructure and operations (I&O). It is no longer optional. It is a response to the increasing scale and complexity of modern, distributed infrastructures, which cannot be managed without it.

The near-term goal of infrastructure automation is efficiency gains, followed by productivity improvements. Cost savings, if they happen at all, will occur in the latter stages of the project.

“Automating infrastructure makes it better, not cheaper,” Delory emphasized. “If you’re building the business case for infrastructure automation, that’s what it should be. Focus on how you’re adding value, not how you’re subtracting costs.”

Quantify the benefits of automation. For example, calculate if the number of deployments has improved because of automation. Ideally, they should increase, and the error rates should also be low. This can make more room for innovation — another benefit that infrastructure automation can provide.

Myth No. 2: Infrastructure Can Be Autonomous

Some vendors claim to offer “autonomous” infrastructure powered by “artificial intelligence” that replaces manual operations (and maybe human operators). But these claims never withstand scrutiny. “Autonomy is not even theoretically possible with current technology, [because] our systems don’t reason. They don’t make judgments," said Delory.

In reality, artificial intelligence for operations (AIOps) serves as decision support for human operators. And in that role, it can be quite valuable. For example, machine learning algorithms can comb through huge volumes of data, finding correlations that a human never could. Thus, AIOps excels at predictive analytics, such as pinpointing when resources will be exhausted or helping to identify the root cause of failures.

AIOps tools can even execute predefined routines in response to certain conditions — presuming a human being devises a solution to a problem, writes code to execute that solution, and defines exactly when and how the AIOps tool is permitted to run that code. AIOps cannot devise a solution independently or fix the problems it finds without human intervention.

Thus, AIOps is potentially very useful, but it is not autonomous.

Myth No. 1: You Are Prepared for Change

The reality is that most enterprise IT organizations simply are not equipped to make the transition to modern infrastructure and operating models. Many veteran I&O staff still lack expertise with new technologies. There are new skills to be acquired, new roles to navigate and new responsibilities to take on. In many IT organizations, the lack of skills has reached crisis levels. Some modernization initiatives have already floundered for want of skilled engineers and architects.

Gartner data consistently shows labor shortages at the top of the job market because there aren’t enough people with modern skills. Infrastructure as code, Kubernetes, DevOps, AI and cloud infrastructure are the skills in highest demand for I&O technical professionals. But it may not be feasible to hire outside experts to fill these gaps as candidates with these skills are rare and expensive.

As it grows more difficult to hire skilled personnel — and as they command ever higher salaries — IT organizations will need to grow skills internally. These skills are best developed as part of a systematic talent enablement program, which identifies and prioritizes the highest-value skills to the IT organization. It enables opportunities for direct mentorship and hands-on experience that classroom training or individual research don't deliver. It can also provide a real-world interface between theoretical knowledge and practical experience. Investing in these programs benefits both the IT organization and the individual employee.

2022 Planning Guide for IT Operations and Cloud Management

Common Pitfalls to Avoid When Developing Your Workload Placement Strategy

Take Control of Your Cloud Strategy: A Large and Midsize Enterprise Perspective