Timing Matters When it Comes to Communicating on Social Issues

Communications on social issues must be well-timed, not just fast, to positively influence stakeholder behavior.

Speaking out on social issues can be incredibly stressful for communications leaders. Even after deciding which issues to engage on, leaders still have to decide when and how to speak out to elicit positive responses. Speaking too soon may seem like a rush to judgment — or, worse still, seem uninformed. Responding too late can mean missed opportunities to participate in the conversation as news cycles move on.

It’s important for communicators to decide when to speak out on contentious social issues. When crafting a company’s response to a social issue, they need to consider timing, among other characteristics, to ensure their message will be well-received.

“Interestingly, message timing has more of an impact than the tone of the message itself, the channel used and whether or not the company actually did something versus just making a statement,” says Edouard Cranwell-Ward, Senior Principal, Advisory, Gartner.

Timing must be appropriate

The typical time frame to respond to a crisis is within 24–48 hours after the event. When it comes to responding to social issues, the 2018 Gartner Optimizing Communications for Changing Stakeholder Expectations Survey shows stakeholders describing responses as being on time when they were days or even years later. This suggests that communicators have more time to respond than they thought.

“ Message characteristics have varying effects on the impact of audience response. Focusing on speed alone is not the best approach”

For example, consider Nike’s advertising campaign and its support of Colin Kaepernick, the American football player who stood up against police brutality. Although this issue became public in September of 2016, Nike didn’t publicly voice support for him and his cause until September of 2018, two years after the initial event. Despite this time lag, 81% of survey participants perceived Nike’s engagement to be on time.

And consider Iceland Foods’ decision to remove palm oil from all of its products in November 2018. Because concern over environmental sustainability and climate change is an ongoing issue, there was no specific trigger event to prompt this change. Iceland Foods didn’t respond to any specific piece of legislation or event — the company just took a position and articulated its stance. Eighty-three percent of stakeholders viewed this action as on time.

Gartner found that message characteristics have varying effects on the impact of audience response. Focusing on speed alone is not the best approach to influence stakeholder opinions. Instead, the survey identifies consistency with company values, the degree to which the organization made a difference on the issue, the authenticity and the alignment with the organization’s business goals as having a greater impact on positive stakeholder behavior. 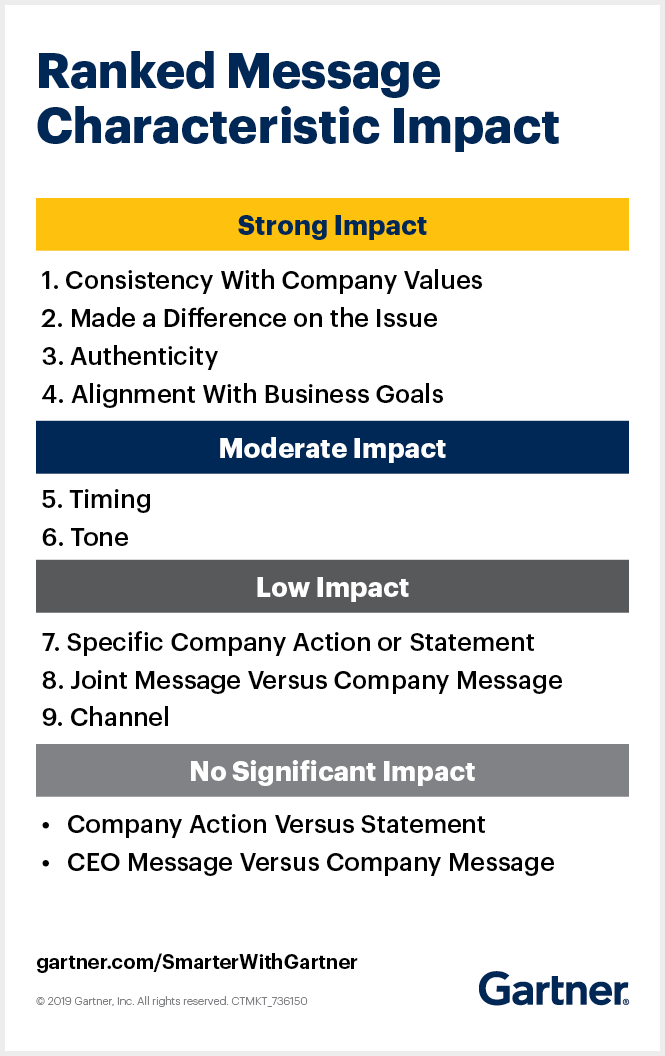 Ultimately, when considering whether and how to take a stance on a social issue, communicators should worry less about rushing, focus on fully understanding the context of the issue and the triggering event (if applicable) — and pressure-test the rationale for, and likely response to, their company’s involvement with the issue.

Connect with CMOs and marketing leaders to get the latest insights on marketing technology, trends, innovation and more.

Communications’ Role in Managing the Experience of Remote Workers

How to Position Your Brand to Drive Preference