Infrastructure and operations leaders under pressure to migrate quickly to the public cloud are susceptible to several common cost mistakes.

More than 70% of companies have now migrated at least some workloads into the public cloud, according to Gartner research. This momentum will continue as companies plan to increase their cloud adoption in the wake of COVID-19.

Yet even as enterprises embrace the many benefits of the cloud, managing the cost of cloud computing is an ongoing challenge. In fact, Gartner predicts that through 2024, 60% of infrastructure and operations (I&O) leaders will encounter public cloud cost overruns that negatively impact their on-premises budgets.

Here are the six common mistakes that cause cloud migration costs to go off the rails and the actions that I&O leaders can take to budget appropriately for cloud migrations. 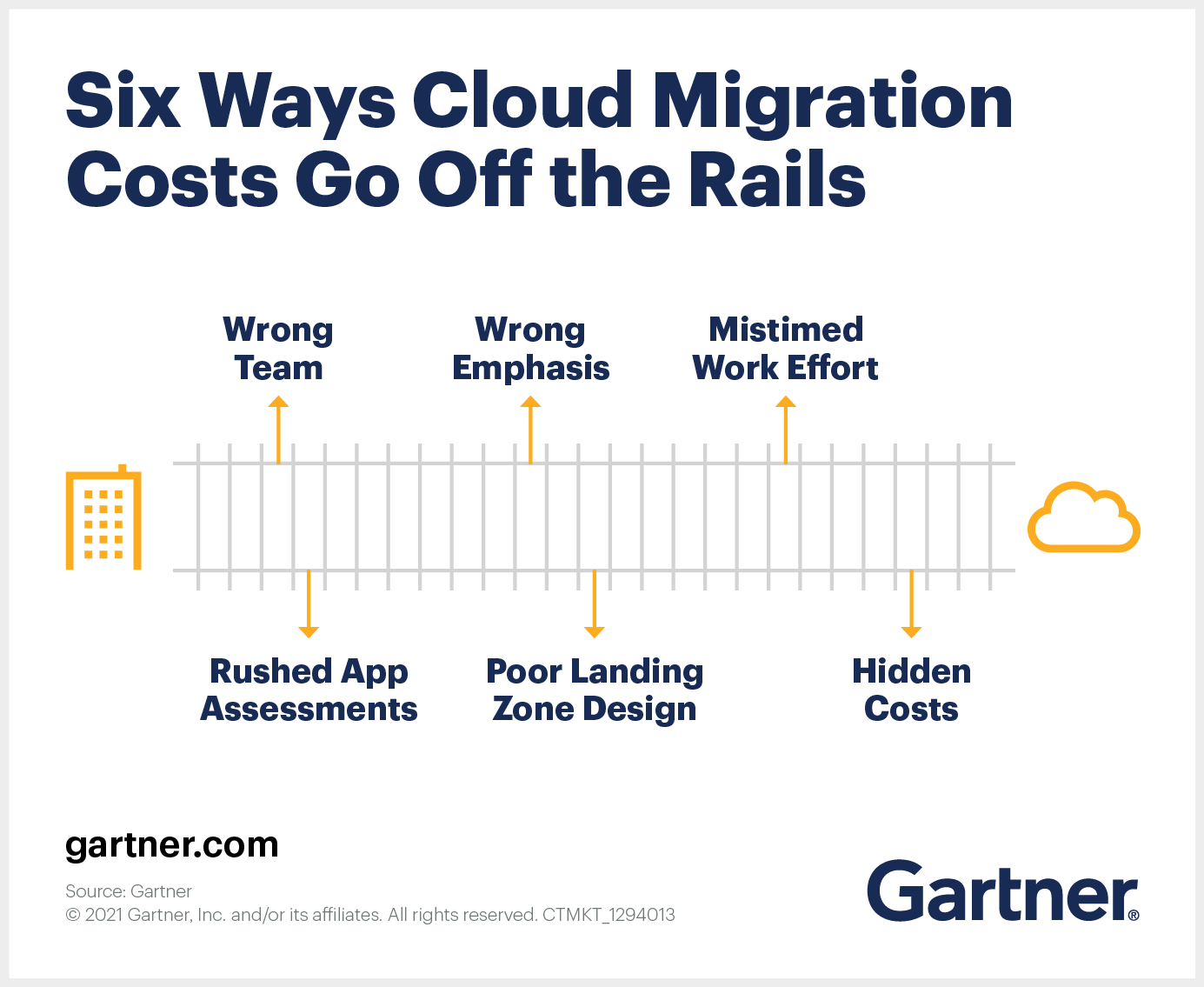 Mistake No. 1: The wrong team

The choice of a migration partner is a critical component of a cloud migration strategy. Yet, many I&O leaders select a migration partner based on familiarity or low pricing rather than experience. Others try to save on partnership costs by giving the migration project to an internal team, even if they are not ready for it. Both of these choices often lead to mistakes and rework, increasing costs in the long run.

Mistake No. 2: The wrong emphasis

Under pressure to move quickly, I&O leaders often prioritize the “lift and shift” approach of moving workloads into the cloud without modifying them. For many on-premises applications, however, the best move for the business may be no move at all.

The best move may be to rewrite and re-release an application in a cloud-native way, or even to replace it entirely with a SaaS-based alternative. Defaulting too quickly to a rehosting approach and deferring the cost to modernize or replace critical applications can result in higher cloud operating costs after migration.

Read more: 7 Workloads That Should Be Moved to Cloud Right Now

The most critical early phase in a cloud migration project is application assessment, as it helps to determine which cloud migration approach should be used for each application. Failing to fully assess the workloads to be migrated is a common mistake, resulting in incomplete specification of migration requirements and downstream scope creep.

If feasible, I&O leaders should ask their migration vendor to propose an initial cost at project start, but submit a revised statement of work and final price after the application assessment phase is complete.

Failing to properly architect and implement the underlying cloud “landing zone” environments into which workloads are migrated can increase the costs of security and compliance. The landing zone setup should include designing account structures, federation to identity directories, virtual private cloud (VPC) networking, role-based access control (RBAC) roles and rule sets, and infrastructure for monitoring, security and configuration management. Ensure that the setup of these environments is considered well in advance of the migration and included in the scope of work.

Another potential mistake that is often the result of an incomplete application assessment is the discovery of dependency bottlenecks. Failing to discover and account for the interdependencies between on-premises systems being moved can lead to incorrect grouping and ordering of application migrations, network performance issues and cascading delays. This can cause migrations to take more time than initially allotted, increasing costs. I&O leaders must map dependencies as part of the application assessment process to ensure appropriate migration timelines.

When budgeting for a cloud migration, I&O leaders often fail to consider indirect project costs, such as those associated with transforming their organization to operate effectively in the public cloud or the residual (sunk) costs of vacated data center capacity. These costs are frequently unavoidable, but are important to consider as a part of the holistic cloud migration budget.

Transformation costs to watch for include the cost to reskill existing teams, the cost to raise salaries to match market levels for cloud roles, changes to organizational structure and operating procedures, and the cost to adopt agile DevOps practices across the IT organization. Common residual costs from a cloud migration include losses in productivity due to vacated facilities and hardware, unused software licenses or unproductive staff. It can also involve the cost to run duplicate versions of the same system during a migration cutover period.

Get prepared to be inspired by the world’s leading infrastructure and operations (I&O) leaders and Gartner experts and explore the latest technologies.

How to Build a Cloud Migration Cost Estimate

100 Data & Analytics Predictions Through 2026 for APAC

Customer Experience 2022 and Beyond: Adapt to Evolving Preferences and Needs

The 3 Main Cross-border Talent Challenges in Business & IT

100 Data & Analytics Predictions Through 2026 for APAC