Cloud Adoption: Where Does Your Country Rank?

Cloud computing initially emerged in the United States. Since 2015, the U.S. has been the leader in cloud adoption and has set the pace for such adoption around the world. However, not all countries are on par with the U.S. In fact, by 2022, cloud adoption for all other countries will lag behind the U.S. by one to seven or more years. Also in 2022 in the U.S., 14% of total IT spending will be on cloud services.

Technology and service providers should prioritize investments by targeting countries and regions with current or planned hyperscale data centers. In parallel, and to fuel cloud spending, they need to focus on organization-specific cloud ambitions, as countrywide opportunities are too divergent. 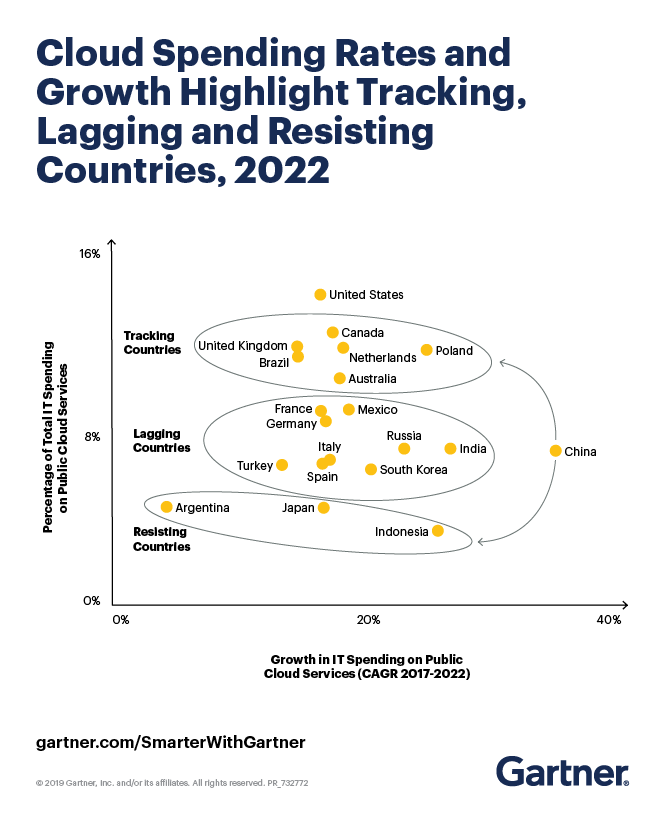 Gartner research on cloud spending and growth per country shows where cloud adoption is happening the fastest and which countries are slower to adopt.

Data centers in Europe were established early on in Ireland, the U.K. and The Netherlands and drove early adoption of cloud services as local organizations took advantage of greater elasticity, self-service provisioning and a flexible, pay-per-use model.

Despite a cloud spending compounded growth rate of 34.8% through 2022, China remains a lagging country (the group lagging by four or more years behind the U.S.). Beyond 2023, China is predicted to become a tracking country.

Through 2022, Japan will be positioned among the resisting countries that lag by seven or more years behind the U.S. While the rate of cloud spending in Japan is expected to rise from 3.0% in 2019 to 4.4% in 2022, many obstacles to cloud adoption exist, such as cultural biases and legislative and regulatory impediments, making it difficult for organizations in Japan to embrace cloud.

2022 Planning Guide for IT Operations and Cloud Management

Start With Infrastructure and Operations to Navigate 2023’s Business Pressures

Develop a Talent Strategy for Your Future Government Finance Office

Go Beyond Surveys for a Successful Voice of Customer Program